Seaplanes in the Home of Naval Aviation: Hammondsport, New York

Every year we leave Keuka Lake soon after Labor Day. In our last days here, we participate in the second and final ring of fire of the season (bonfires and flares all around the lakeshore), we put away all our toys (kayaks, paddleboard, sailboat, glider—swing, not plane—grill, etc. Many hours of work!), we close the windows to get through the cold nights (so sad!) and we head off for parts unknown. This year is different. We’re headed to Alexandria, Virginia, to care for our new grandchild. (Yay!) We don’t start till October so we aren’t in a rush to get there and we’re not in a rush to leave. Finally we can enjoy a popular post-Labor Day event: the seaplane homecoming!

In this poster, the seaplane is heading south just beyond the bluff, about where our house is.

We rode our bikes to Hammondsport—still warm enough on September 17 for biking during the day. As we approached Depot Park at the bottom, as in south end, of the lake, we heard an announcer say, “This is the first time bombs will be dropped on Keuka Lake!” All of a sudden the event sounded very exciting. It turned out the bombs would be grapefruits—not explosive, but they still made big splashes visible from shore. The MC made another announcement. The first person who paid $50 to the Glenn Curtiss non-profit would have the chance to be a bombardier. Michael was too slow on the draw to snap that up; it was gone in an instant.

Bombardier heading for a seaplane. (Note the grapefruit “bombs” ready to be loaded.)

The planes flew toward town lining up between two orange buoys and then dropped the “bombs” to try to hit a target. Most of the grapefruit fell quite distant from the target. We heard an explanation from the announcer. “We civilian pilots aren’t used to throwing things out the windows of our planes.” That sounds appropriate. Who won? It was the volunteer bombardier. His bomb landed just six feet from the target.

A seaplane getting ready to taxi into the lake and take off.

After the bombing runs, the planes headed toward the beach, flying in and landing on their pontoons on the water. They dropped their wheels and with a final engine burst, they drove out of the lake onto the small beach. A couple planes needed a bit of help to maneuver into place, so folks in the crowd helped push. These planes are quite light.

Many of the pilots were friends, who meet up at fly-ins all over the East. Some were just coming from an event in North Carolina. Their planes had a lot of variety, with older Seabees on struts, some dual-prop (front and back) models, and even one that was built by the owner. 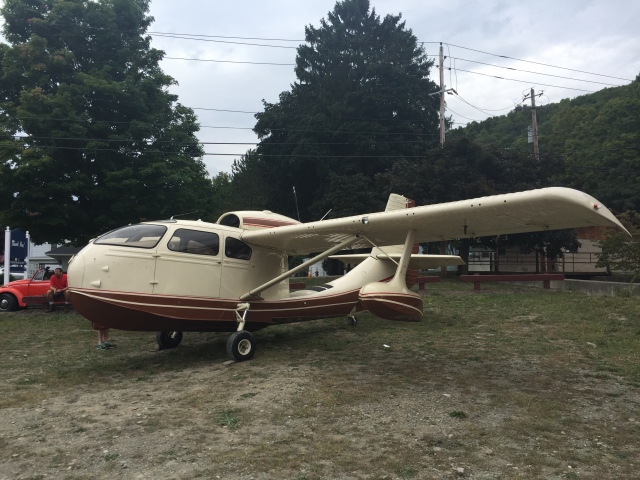 Hard to tell it’s a seaplane. Where are the pontoons?

This Cessna took a pacifist role in the day’s event, not participating in the bombing. We see it often along the Keuka shoreline…and in the air.

While the pilots patiently shared information about their seaplanes and posed for photos, the rest of us lined up for pulled pork sandwiches, just like Charlotte! The fire department boat came out on the lake to demonstrate its amazing spray. We heard someone in the crowd ask, “How much water do they store on that boat?” We think he was being funny, but couldn’t be sure. (FYI The boat draws its water from the lake, just as we draw water for our home from the lake.) 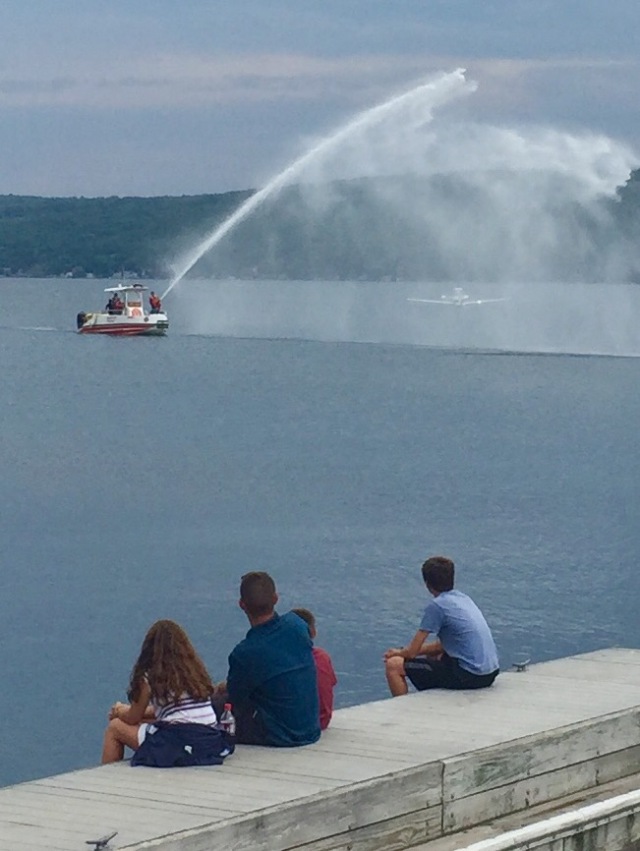 It reminded us of the Jet d’Eau in Geneva, but with a sideways tilt. 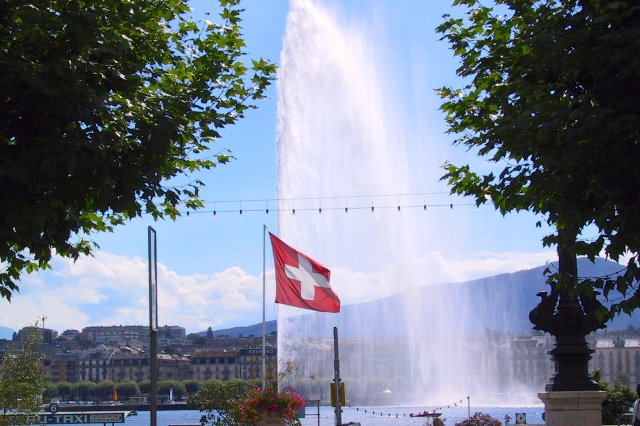 Glenn Curtiss, like the Wright brothers, was a local mechanic, repairing bicycles and small engines. He created his first flying machine, a dirigible powered by a motorcycle engine in 1904, some would say before Wilbur and Orville got off the ground. As the nation was preparing to join the war to end all wars, now known as World War I, Curtiss was preparing to fly across the Atlantic. In fact, we ran across the home of one of his fellow racers, Auguste Maicon, in Villefranche-sur-Mer.

By 1913, Curtiss had started training Yale aviators to fly the Curtiss Model E flying boat, truly an aviation wonder. Several years ago, seaplane enthusiasts restored one of the 100-year-old crafts and flew it over Keuka. Watch the Model E Flying Boat video at the Glenn Curtiss Museum. (You can even see the Keuka Maid dry-docked in the background.)

After the excitement of the afternoon, we rode our bikes home and were just in time to see the flyby. All the seaplanes flew up and down the lake, looking a bit like geese, almost in formation, as they said goodbye to summer.

After I took this photo I opened my email and saw that I had won a prize from the summer reading program at Pulteney Library. There’s a kids’ program too, but I feel like a kid participating in this annual event. Other years I’ve won wine, custom pottery, marina gift cards, a bag of books, and more. My prize this year was two passes to the Glenn Curtiss Museum. Is that a coincidence or what? We will visit next summer for sure.

We went for our last swim today, September 25, and the water in Keuka Lake was still 72 degrees, much more comfortable than we expected it to be. As I write this note, we’re driving to Alexandria to start the next chapter in our lives with our grandson, the current and future aviator.

Our little Keuka aviator on his first flight, with Mom as copilot (and engine).

Post Script (I’m not getting this posted until Nov!): A month has flown by. We’ve had four weeks of bonding with this little guy. He’s adorable! And during that time, he’s flown to three different states and a foreign country. Following in Glenn Curtiss’s tracks, or contrails, for sure!

This entry was posted in Smell the Roses and tagged Glenn Curtiss, Hammondsport, Keuka, seaplane. Bookmark the permalink.

4 Responses to Seaplanes in the Home of Naval Aviation: Hammondsport, New York