Our own private Finger Lake seaplane tour…It was great!

Since we bought our home on Keuka Lake in the late 1980s we’ve enjoyed cruising along the shoreline. Michael calls this a “real estate cruise.” Today we made the cruise with a different perspective, from 1,000 feet in the air. 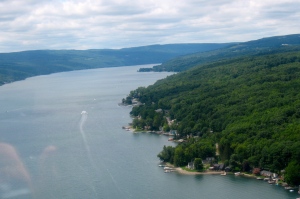 The journey south from our house, way above our normal “flight path” by boat

At Harbor Lights Marina, just a hop and a skip from our home by seaplane, Andy and Bob have started the company Finger Lakes Seaplanes.

Harbor Lights Marina has always had a flag flying. Now it’s joined by a wind sock.

They offer customized air cruises over Keuka and beyond for up to three people at a time. These guys are both commercial seaplane pilots with more than 30 years of flight experience between them, very professional and personable at the same time. With lots of information about the area we were flying over, they provided a safe, informative and fun trip. Headphones included!

In our 30-minute voyage we flew the length of Keuka Lake, 21 miles between Hammondsport at the south end and Penn Yan at the north, then a hop over the bluff to Branchport and a cruise back down the west branch of our crooked lake. It was fantastic seeing some of our favorite lakeside sights with views we’ve never had before.

Hammondsport, from a whole new perspective

Here’s a perfect example. Back in the 1970s and early ’80s we visited the working Gold Seal Winery, a beautiful spot for a tasting right along the lake. Sadly, it closed in 1984. Built in the late 1800s, it’s now on the National Register of Historic Places (lots of info about Gold Seal there). For several years we heard that new owners were planning to renovate the site for a rebirth. We saw giant dumpsters filling with items to be removed. The building still looks whole from the road. However, look at this aerial shot and you’ll see that the roof has fallen in.

Gold Seal Winery, not quite ready for reoccupation

We love going to Hammondsport (America’s Coolest Small Town) and walking around our own version of Stars Hollow. (Catch up on Gilmore Girls if you don’t get the reference.) We have our favorite restaurant, bakery, and liquor store and our friends at the post office. The square hosts weekly Thursday night concerts and the annual craft sale, arts sale, and palette auction. From this perspective, it does look cool. It also looks so small! 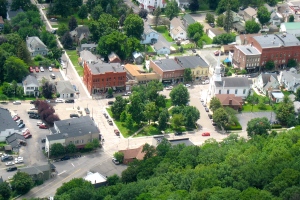 Every year Michael gets a from-the-water vision of Keuka College when he participates in the Keuka Triathlon when the water is still in the low to mid-60s. Brr. But from this perspective, it’s a view of a lovely, peaceful campus centered on the pretty white Norton Chapel.

The go-kart track in Penn Yan is one of the first places Chris “drove a car,” probably almost 20 years ago. Today it has finally gone out of business, but it sure looks neat from above.

Go-kart track ready for someone to scoop it up and reopen for the next generation of racecar drivers in training.

Along the west shoreline is Camp Good Days and Special Times, a very special organization that provides camping experiences for kids with cancer. It started in 1979! From the road we see the pool, but the rest of the facilities—cabins, playground, mini-golf, beach, basketball courts, an iceberg float and lots of space to play—are hidden from view until you’re up in the air. Over its many years of service, the camp has helped more than 45,000 kids have special times on Keuka Lake.

As we passed Pulteney we could see Gilded Grapes vineyard owned by our friends John and Pam Althouse. Some of their premium grapes end up in lovely white wines from Dr. Konstantin Frank. We’ve spent a couple hours with them helping with maintenance tasks on the vines: tying up shoots, removing excess leaves, adjusting support wires. Our contribution was minuscule, but John is out there every day, Pam most days too, doing the painstaking work that gives these grapes their perfect sweetness and acidity, taste and nose. Some years John gets help from Mother Nature with just the right amount of sun and rain. Other years, he loses a significant part of his crop to horrendous wintry freezes. Here’s a riddle from a vineyard owner. Question: How do you make a little money running a vineyard? Answer: Start with a lot of money!

Gilded Grapes, one of the best-kept vineyards on Keuka Lake!

Keuka is the Y-shaped Finger Lake, with the bluff coming down the middle of two branches. From our perspective on the western shore, we see the image of a wine bottle on its side. From the air, the bluff actually looks like an island rising out of the lake.

Just past the bluff we buzzed over Garrett Memorial Chapel where Liz and Jesse were married. From the water the chapel is virtually invisible as it is surrounded by lush forest. In fact, just small bits of the lake are visible in views looking out from the chapel. From the air we can easily tell that the chapel exists. It’s the rooftop at the bottom of this photo.

Garrett Chapel from the air

Interestingly, Andy is the brother of Art, who owns the Manor House where Liz and Jesse had their wedding reception. On the western hillside of Keuka is Heron Hill winery.  That smaller white Tudor house with a brown roof on the left? That’s the Manor House. (Click on the photo to blow it up.) Aah! Happy memories.

The plane is a Cessna 180 and it was manufactured in 1954. (Now don’t think that’s old. A lot of good things were born that year.) It looks so young and fresh because every 100 hours many key parts are inspected, tested, exchanged, etc. as required for commercial use. We had no hesitation on the airworthiness and seaworthiness of this craft. Don’t we look enthusiastic?

Chris and Nancy ready for our tour.

This is the first year of operation for Finger Lakes Seaplanes. They hung out their shingle just a few weeks ago and through word-of-mouth advertising they’re already getting as many as eight flights a day. We love seeing them fly past. This fall they’ll be offering rides at the fly-in for the Keuka Lakes Seaplane Homecoming. (Read about the 2016 seaplane homecoming here.)

Da Plane. I forgot to ask if it has a name…

We were so pleased to meet Andy and Bob. Their effort exemplifies what’s great about America. These two men spent years working at a craft building their skills, took some risk, and channeled their passion to create a business around something they love that provides a unique and valued service for their neighbors. Kudos to them!

This is a view from above of the famous USA sign planted by local Branchport farmers in September 2001 to honor victims of the 9/11 terrorist attacks.

Book a flight with Finger Lakes Seaplanes. Tell your friends. And ask Andy or Bob to dip a wing to say hello as they pass over our cové. We’ll be waving from the dock. 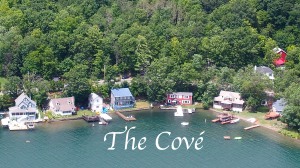 Our little bit of paradise along Keuka Lake

7 Responses to Our own private Finger Lake seaplane tour…It was great!