Trixie Belden and the Mystery of the Weird Structure

Our Keuka neighbor Julie and I went on a short hike on the Finger Lakes Trail south of Hammondsport NY. Julie had just returned from a 100-mile hike on the Appalachian Trail through Shenandoah National Park, but this was going to be just 3 miles—more my speed, or rather distance. Julie is an expert planner for outings like this. Read about her approach on her PlanPackGo site. Following her advice I put on some Off bug spray to keep the mosquitoes, gnats, black flies and other pests away. 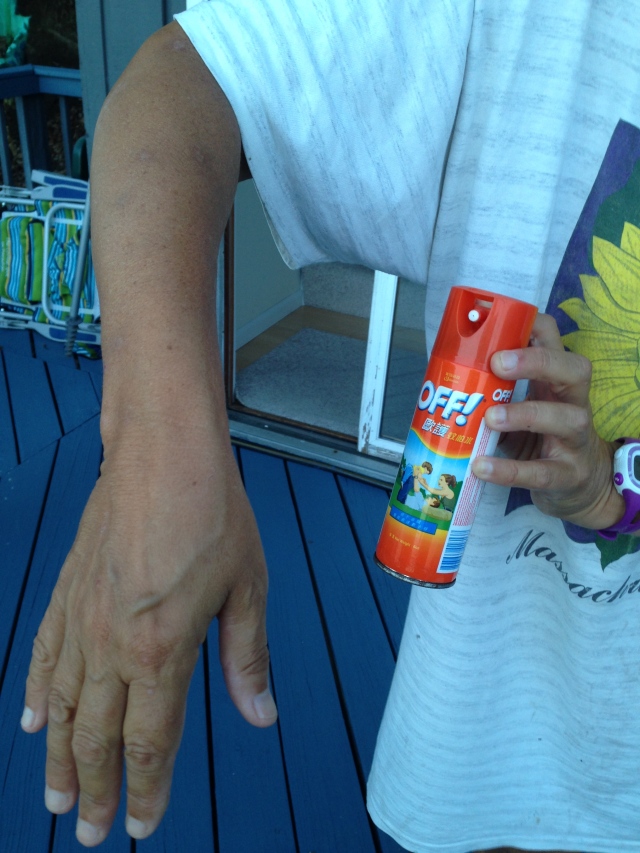 Notice the Chinese writing on our can. This is Off from our time in Hong Kong, 1995 to 2001. Despite being almost as old as Patrick, it still worked.

During our hiking chatter we found out that in our youth we were both Trixie Belden fans. Nothing like a good mystery! If you don’t know the name, Trixie and rich girl neighbor Honey inhabited a parallel universe with Nancy Drew. They lived in upstate New York and found more jewel thieves, antique thieves, and all-around bad guys than you can find in Chicago today. In every book Trixie, Honey, and the Bob Whites solved a mystery, escaped some danger, and were exceptionally conscientious about doing their chores at home.

So we happened upon a mystery that Trixie and Honey would have spent a full book solving. This is it. What is it? 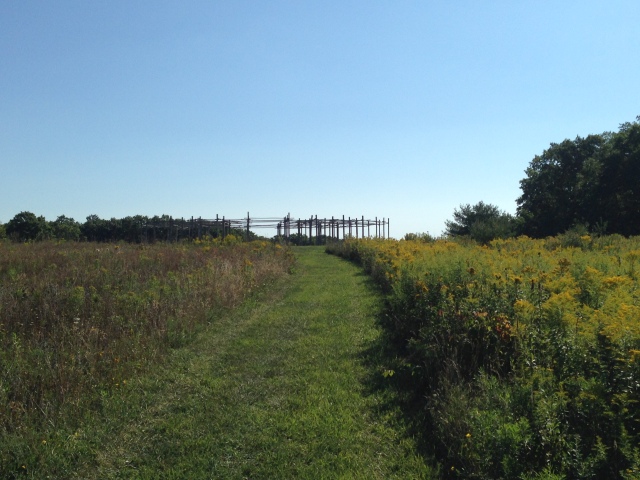 Very odd to see this kind of standalone structure at the top of a hill in the middle of nowhere.

Spoiler Alert: The answer is coming. Scroll to the comments and make a guess before you keep reading.

Our first guess was a drying rack, possibly for hops. This wasn’t all that likely since there wasn’t any hops in sight. Maybe we were just thirsty and thinking about having a beer. (These photos are hops from our trip to Washington/Oregon last year.)

Does it need to dry? 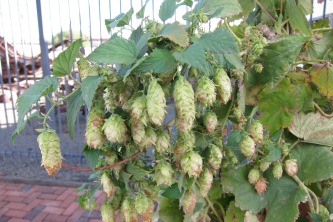 Hops from our Washington travels

Maybe the mystery structure was for drying marijuana, although the area seemed too exposed for something that is still so illegal. Tobacco? That doesn’t grow this far north. And where are the crop fields? Of course it could have been a drying rack for clothes. But as we got closer it seemed obvious that it was too large and too high, not to mention too far away from a house, to serve this purpose.

We continued on and found another clue. This blue stone, obviously manmade, was just off a trail at the edge of a field in the middle of nowhere near a wooded area. It could have been a piece for a mancala game or a collapsed marble or a decorative stone used for flower arranging. But why here?

Not a diamond, as in Trixie Belden and the Gatehouse Mystery, but a blue stone.

At the top of a hill was a very nice bench with a spot overlooking a small lake next to a farm. Several colored flags stood in a circle. Another piece of the mystery. 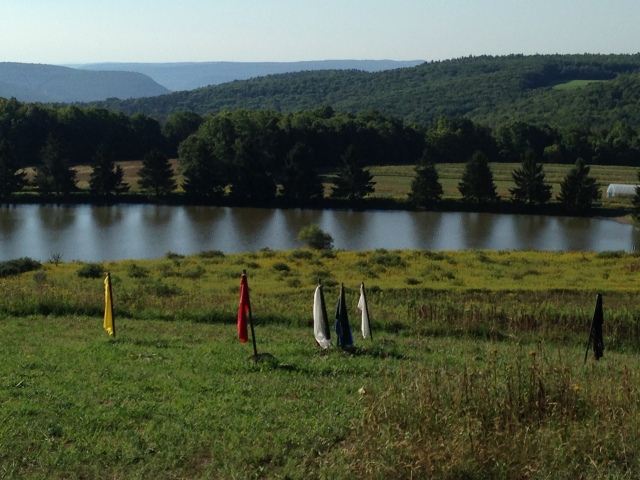 Beautiful spot to rest. What’s with the flags?

Trixie and Honey probably would have figured out everything from these clues, but we were stumped. We decided to take the easy way: Walk down to the farmhouse and simply ask. No one seemed to be around until we poked our heads into a greenhouse and met Kevin O’Brien, who explained it all.

Kevin was tending microgreens (which looked delicious). For eight years, he’s worked on this site, which includes an organic farm, Thunder Mountain Foods. They provide microgreens and wheatgrass across upstate New York (including our favorite store Wegmans) AND they have a CSA, with an option to do a work share: Work at the farm for a few hours a week and take home fresh organic produce. We’re on it for next summer!

Microgreens in the greenhouse just beginning to grow when the rest of the area’s crops are at the end of the season.

That didn’t clear up the mystery of the odd structure, but Kevin explained the second function of the site, hosting PeaceWeavers, a community formed when the drums of war beat in the 1990s for Operation Desert Storm in the Middle East. The group’s spirituality draws on Buddhism and Lakota Native American tradition. The sanctuary hosts retreats, seasonal gatherings, and in some years a natural building colloquium, NBC.

Among other materials, the natural building process uses mud and straw. 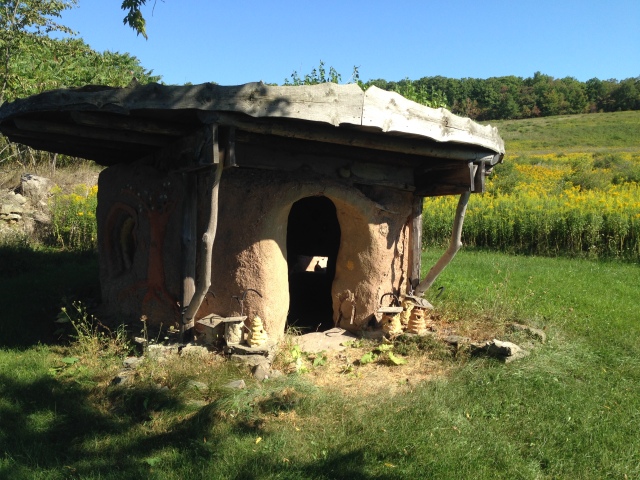 Which little pig built a house of mud and straw?

On this hot day, it was cool and pleasant inside. One mystery was solved as well. 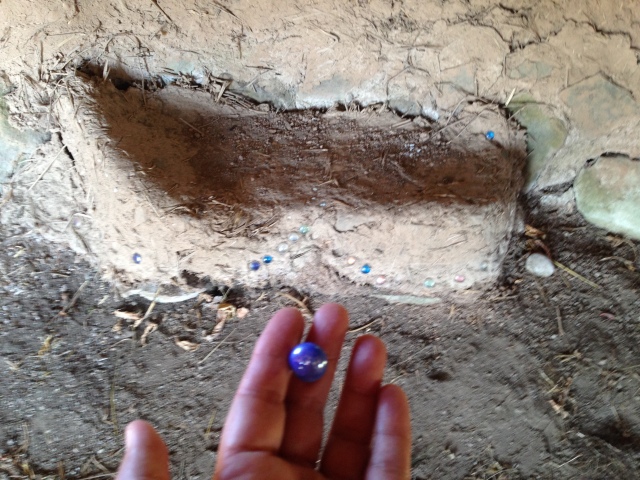 The blue stone is one of the decorative pieces placed in the mud.

The group built a meeting house several years ago, a Round House.

Notice the greenery now growing on the roof.

Inside the meeting house, very cozy.

Nearby is one of the simplest and most essential structures, an outhouse. 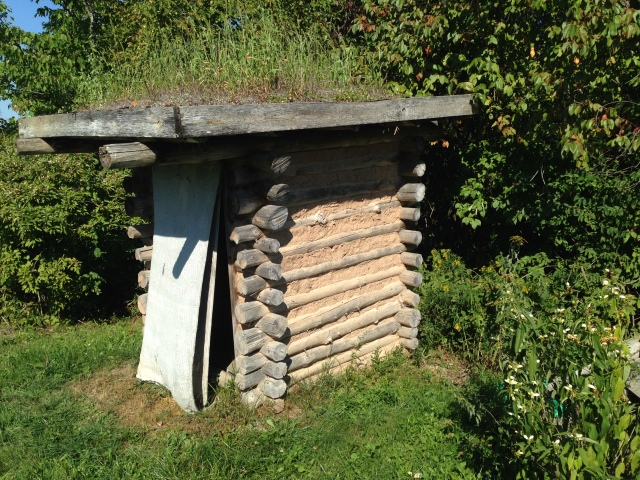 All it needs is a half-moon cutout on the canvas door.

The retreat includes a sweat lodge, although with the hot weather this summer, a fire in an enclosed structure wasn’t really needed to work up a good sweat. 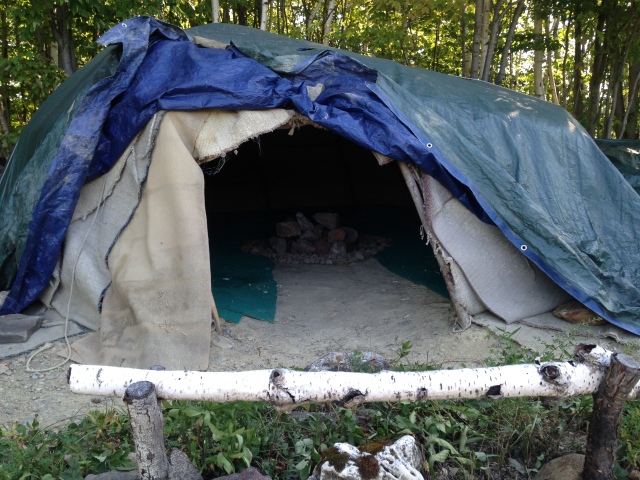 We found out the flags we had seen above the lake were part of a medicine circle. Finally we came back to the mysterious structure. Its function became more clear when we saw the fire pit at the center. When PeaceWeavers hosts events, the structure becomes a shaded arbor. Pine boughs are placed on the overhead lattice and participants gather in the shade while the group creates a sacred circle for silent meditation. Mystery solved! 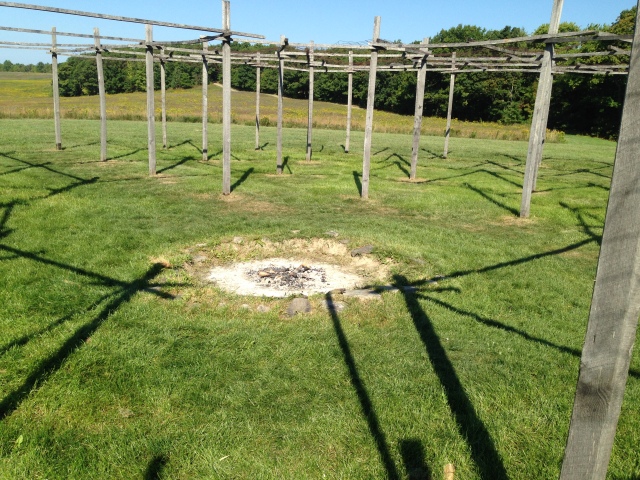 Imagine a group of like-minded folks weaving a circle of peace around the mysterious structure.

Here they are! The Peace Weavers (Photo from their website)

We were happy to find such an interesting spot. You don’t have to travel around the world to find something worth visiting. 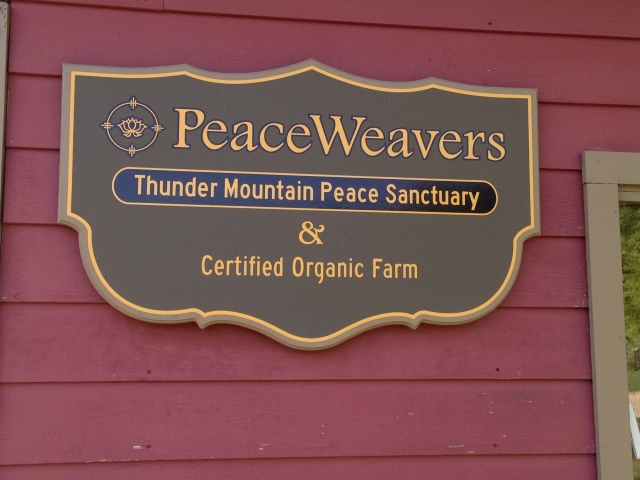 Our return home brought even more surprises. Who would have thought that smelly old shoes could be repurposed as containers for succulents? 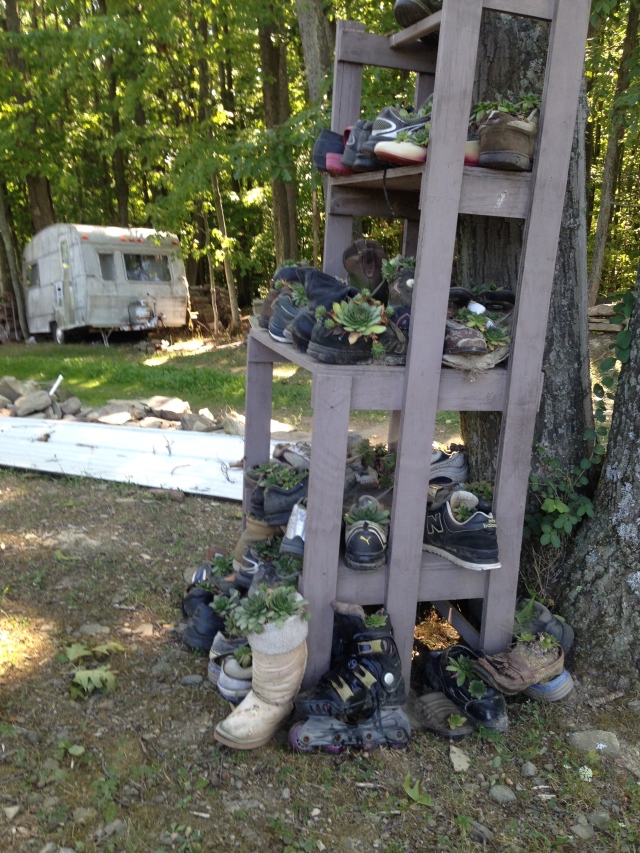 This is only about 10% of the garden of hens and chicks in shoes. Note the greenery popping out of the roller blade.

We may have stumbled on the world’s smallest church, on Robbins Road outside Bath.

Where is the rest of the church?

We ran into Jim Robbins (yes, related to the road), who explained what we were seeing. At one time, in fact for over 100 years, a Methodist church stood on this site. Some time after the church roof fell in, the building was removed but the steeple was left standing. This wasn’t dropped from a rooftop; it is the original position of the steeple. Jim and his family plan to repair the steeple, probably next year. We’ll be back to take a look.

Foundation stone inside the steeple

Julie and I enjoyed our outing so much that we’ve decided to write a book together about Keuka Lake. Watch for its publication next summer!

Meanwhile, Michael and I still have more to publish from our trip this spring, specifically Mexico. That will come soon.

This entry was posted in Smell the Roses and tagged Keuka Lake, mystery, retreat, trixie belden. Bookmark the permalink.