From Sea to Shining Sea!

After 52 days and more than 7,000 miles, we have reached the Pacific Ocean!

Another writer has described this journey more poetically than we ever could:

Watching the clouds from our hammock (Vermont)

For amber waves of grain

Sunrise in the Tetons (Wyoming)

Above the fruited plain

A patriotic paddleboat: Queen of the West on the Columbia River (Oregon/Washington)

God shed His grace on thee

And crown thy good with brotherhood 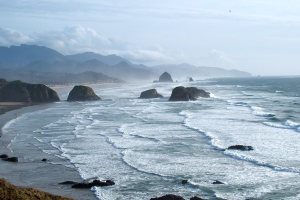 America the Beautiful comes from a poem written by Katharine Lee Bates from Falmouth, Massachusetts (near the underarm of Cape Cod). She was inspired by the spectacular sites she observed during her journey to Colorado in the late 1800s. Atop Pike’s Peak is a large plaque of these beloved words, which were set to music by Samuel A. Ward.

We passed this smaller version of the plaque on the “Shining Sea” bike trail from Falmouth to Woodshole, on Cape Cod. The moving words have been an inspiration for us on this journey. 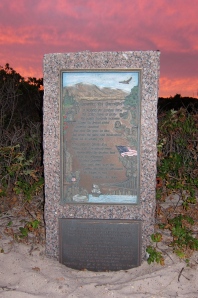 From Sea to Shining Sea…

This entry was posted in Smell the Roses, Travel Journal and tagged America the Beautiful, Atlantic Ocean, From Sea to Shining Sea, Pacific Ocean. Bookmark the permalink.

2 Responses to From Sea to Shining Sea!