The massive Pineapple Express storm was predicted to ravage the area, but we ended up with beautiful sunny skies as we drove from Portland to Astoria, Oregon. Astoria was again named after that fur trader, John Jacob Astor. The family got around: from the Waldorf Astoria Hotel in New York City to the hinterlands of Oregon.

We criss-crossed the Columbia River, intrigued by all the logs and lumber products all along the banks.

Lots and lots of these trucks hauling big logs

At one point we passed Longview Washington where wood products were being loaded onto large cargo ships.

Looking back toward Longview Washington at 11AM.

Two hours later, an EF-1 (86-110 mph)  tornado rolled through Longview, touching down for 1.3 miles in a 200-foot wide swath of destruction. No deaths or even injuries, thankfully.

We reached the Astoria-Megler Bridge. At four miles long, it’s the longest continuous truss bridge in the country, but only two lanes wide. This was down to one lane with stop-and-go traffic during the four-year repainting project that lasts through 2016. When the bridge was built in the early 1960s critics called it  a “bridge to nowhere,” connecting a small town to an empty shore, but now it transports over 7,000 people daily, with no toll (having been eliminated in 1993).

Then on to the Oregon Coast, our home for the next eight days. Michael’s mother, Marcia, had met us in Portland for this portion of the trip, fulfilling a very strong desire to see this part of the country. We hoped for some visibility to make the trip worthwhile and we got it! 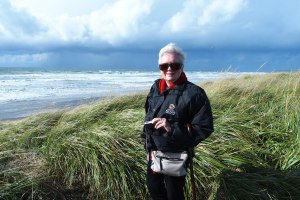 Introducing Marcia to the Oregon Coast

Our first view of the coast was up and over a dune, a bit of a climb, but worth it. With wind whipping the surf and sea grasses fighting the gusts, this rugged shoreline is what we imagined for Oregon. Nature is powerful here. 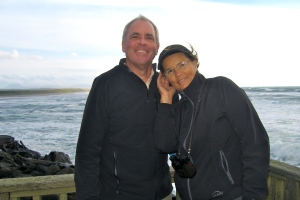 To keep inquisitive sightseers from climbing on the rocks and ending up in the drink, the state has provided a great observation tower at the south jetty at Fort Stevens State Park.

We could actually feel this massive structure shaking in the wind. (Nancy and Marcia waving)

From here we could see the coastline. One little sea lion bounced around in the swirling waters just off the rocky shore protection.

Waves splashed 20 feet in the air, going over the jetty.

Our view also included the delta of the Columbia River, very wide here as it rushes into the ocean. We saw ships filled with containers, logs, and oil moving in and out. On this particular day it seemed like the boats going upstream were aided by a wind at their back that was stronger than the current. 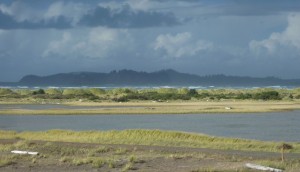 The waves in the distance are on the river, not the ocean.

Near Astoria is Fort Stevens, the only place in the continental US that was attacked by Japanese bombs during World War II. The battery on the shore shows the site of two American guns. US troops never fired back on the Japanese submarine for fear of revealing their site, but they were prepared if the attack continued.

This part of the coast is very difficult for navigation. In 1906 the 285-foot, four-masted cargo ship Peter Iredale was just reaching the mouth of the Columbia and had trouble maneuvering in the wind and fog. The ship was forced aground just off the coast and then driven right onto the coast by wind and waves. Over the years, the bulk of the ship’s carcass was stripped for salvage materials. This bit of the bow remains 100+ years later. 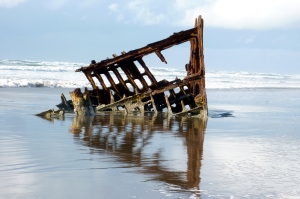 Once a mighty ship! Thankfully all 27 crew members and 2 stowaways survived.

Waves have been crashing here for 100 years, yet some of the hull remains.

Monet could have added this to one of his famous series. It’s Haystack Rock in Cannon Beach Oregon.

This post doesn’t capture the sound and feel of the wind and the salty taste of the sea mist. We were very happy to have this day of sunshine to appreciate Oregon’s coast. With projections of pouring rain tomorrow we’re headed inland.

As far as our day yesterday in Portland…it was a wash, quite literally. We were able to visit Powell’s Bookstore (inside), have beer and dinner in Lompoc Tavern (inside), and taste the world’s best handmade ice cream at Salt & Straw (inside), but our view of the International Rose Test Garden and other outdoor sites was mostly rain. It didn’t get our spirits down.

Marcia always has a smile as her umbrella…plus this large actual umbrella for Oregon’s extra wetness.

One final indoor spot for Patrick and Liz, Southland Whiskey Kitchen. When it rains outside, they pour inside.

Pat can drool over the wall of whiskey. Liz can advise us on whether Prop 92 for food labeling is a good or bad thing.