Yakima was a familiar name, since Michael’s brother has a big Yakima ski rack on the roof of his car. (The original Yakimas did come from Yakima.) Zillah was a new name for us and Toppenish was an unexpected treat.

We didn’t know that Yakima was a fairly large city, very important in our lives in several ways. Why?

The Yakima Valley produces roughly 70% of the hops grown in the US, on over 19,000 acres. Hops, of course, is the key ingredient in all those craft beers we love. 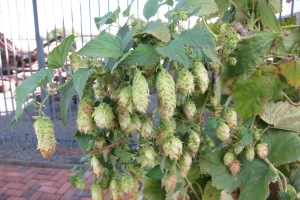 The valuable part of the hops plant, the female fruit, with “essences of tangerine, bergamot, and citrus.”

Baarth-Haas, the big hops company here, finished its harvest a few weeks ago and the product is now drying in giant warehouses or pelletized and on its way to a local craft brewery near you. We were two weeks late for the Fresh Hop Ale Festival, one of the top 10 beer festivals in the country. Here’s the last bit of hops on the vine. 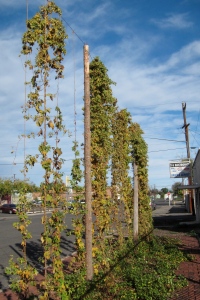 Hops just for display outside the Hops Museum in Toppenish. Harvest was a few weeks ago.

Hops is not the only crop grown here in Yakima Valley. We saw acres and acres of apple orchards. Many of the apples had been harvested already, with culled red apples on the ground. Sometimes we’d see a lone tree filled with yellow apples in the middle of other defruited trees. Michael figured out that this was in place to enhance pollination. Most likely those apples will never be picked. 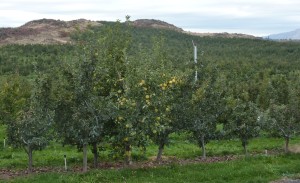 Notice the apples on the ground and these yellow non-varietals left in the tree. We need some foragers here.

We noticed the “new” method of apple growing that has been put in place with the help of Washington State University agricultural advice from TFREC (Tree Fruit Research and Extension Center). The trees are trellised almost like grape vines, supporting the branches and giving the fruit plenty of exposure to sunlight. Lots easier to pick too vs. climbing 30 feet in the air. 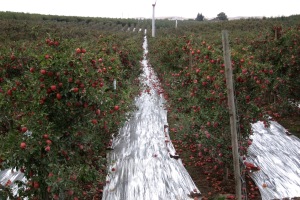 Not the apple trees we’re used to.

So when you see Washington Apples in your local grocery story, they may have come from one of the orchards we passed.  We visited a couple wineries here too: Maison de Padgett and Severino, both very nice small family-owned vineyards with excellent wine! (We picked up some bottles to bring to Sonoma.)

Toppenish is the City of Murals and Museums, “where the West still lives.” These are great big names for a little town (only 9,000 people). But it makes a fascinating visit. 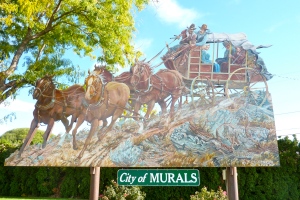 Don’t blink or you’d miss it and you DON’T want to miss Toppenish.

There are 73 (and counting) murals here! These are larger than life and quite high-quality murals on the sides of buildings throughout the small town. The very first mural was a 40-foot painting created in a single day by 15 western artists on June 3, 1989. 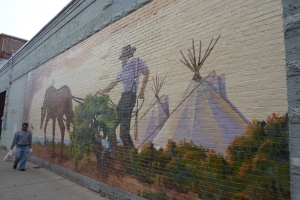 “Clearing the Land,” mural number 1. Little did they know in 1989 what they were starting.

The town has a Hops Museum, already closed since the season is over! But there are several murals dedicated to hops, given the importance in the region’s history. 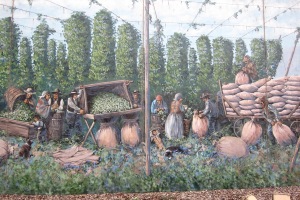 “When Hops Were Picked by Hand” sponsored by the hop industry, which created a pretty little park called Old Timers Plaza nearby.

The town commissions an artist or artists to create that year’s mural every June. Some of the murals are nicely suited for their locations: “Presumed Innocent” on the city jail building, “NP Railroad” on the train depot, “Halloween Pranks” showing kids tipping over an outhouse on the public restrooms. Very clever. 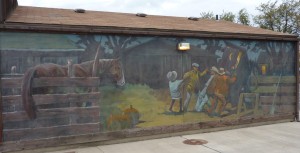 “Halloween Pranks” Probably the modern restroom is less easy to push over than the outhouse was. 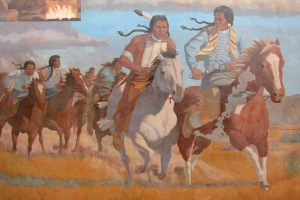 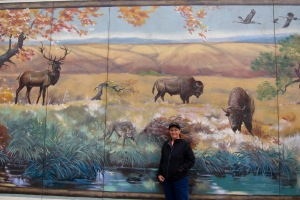 “Wildlife” shows wildlife native to the valley before settlement. (It reminds us of our visits to the Tetons and Yellowstone.) 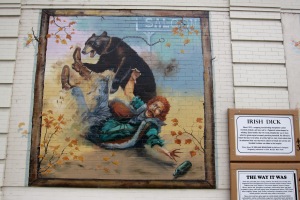 “Irish Dick” (for our O’Connell clan) tells the story of a hard-drinking shepherd scrapping with a grown-up bear he had known as a cub. Dick did not fare well.

Walking around the town offers one surprise after another. And the aroma from the paneteria on the main street is heavenly. The pastries taste great too. 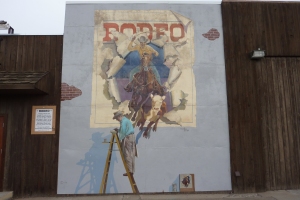 Finally, we stopped at Zillah, on a Mark Real style quest (presidential birthplaces and more). This is the location of the Teapot Dome Gas Station. During Warren G. Harding’s administration, naval oil reserves at Teapot Dome, Wyoming were leased to private operators without competitive bidding. Once this was known to the public, it was a HUGE scandal, which in 1922 inspired local Zillah businessman, Jack Ainsworth, to create a commemorative service station. 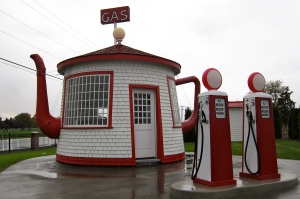 Teapot Dome Gas Station: an unusual homage to a scandal.

The gas station is no longer in service, but we did have a pleasant surprise in nearby Toppenish. Gas was only $2.75/gallon (vs. $3.35 a couple miles away). Why? We were inside the Yakama Nation, where gas tax is only 25% of the amount elsewhere in the state.