Now that that pun is out of the way, we had a glorious day to explore Mount Rainier National Park.

We’re in the middle of the Cascade Mountain range that runs through Washington and Oregon, actually all the way from northern California to British Columbia, Canada. We’re next to a line of mountains formed by volcanic activity. Mount St. Helens, 35 miles away, erupted in 1980. Rainier most recently erupted at least a dozen times between 1820 through 1894; geologists are waiting for “the big one” which could create deadly mudslides or “lahars” that might stretch all the way to Puget Sound and Seattle.

For now it’s bright and sunny and the ground seems very stable. There is no seismic activity as we look up to the top of Mount Rainier at 14,410 feet above sea level, a very impressive site.

From Skyline Trail above Paradise Visitor Center, about 5,800 feet.

The mountaintop peeked out and went back into hiding frequently during our visit. The peak is shrouded in clouds many days of the year. Officially rain (or snow) can occur any day. Park rangers describe Mount Rainier as a magnet for snow. At Paradise, the visitor center at an elevation of 5,400 feet, the average snowfall is over 600 inches (50 feet) and the highest recorded snowfall was over 1,100 inches (93 feet!) in 1971-1972.

This area is usually covered by snow until July.

With the heavy layer of snow already on the mountain, it’s attractive for ambitious skiers and snowboarders. This requires a hike from 5,400 feet to about 10,000 feet to reach skiable snow, then a 2,500-foot run, just once for the skiing couple we talked to. No chairlift to bring them back up to the top. 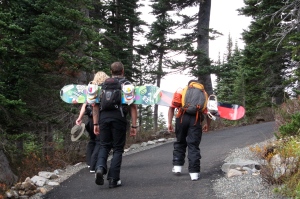 From 5,500 feet, a long, steep hike ahead. We saw them as tiny specs still climbing up the snow mass later in the day.

We climbed about 700 feet on beautiful National Park Service trails with a Skyline view of the mountain range.

Each year over 10,000 people attempt the climb, about half of them reaching the summit.

And we followed Alta Vista down for another perspective. Another hiker told us this would give us the best view of fall foliage, so we expected yellow aspen, red oak, and more. Instead the hills were alive with the colors of shrubs. Green lupine plants are everywhere; their lavender blossoms peaked in July and August. Other plants have turned red, orange, and yellow. 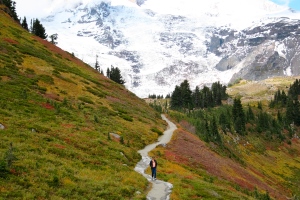 The hills are alive! 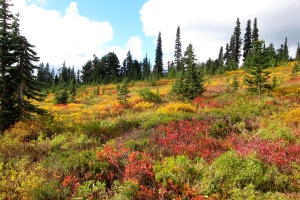 Quite the color palette!

We noticed something that looked like Spanish Moss hanging from many of the trees in certain sections of the park. We wondered if it was a new invasive species that is killing off the evergreens. It’s not. In fact it is Usnea, a gray-green lichen that has been around for ages. 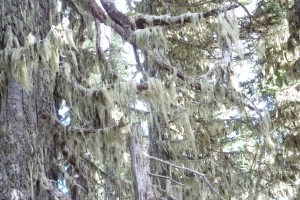 The trees looked as if they were already bedecked for Halloween spookiness.

From nature guide P. M. Fogg (1925): “By reason of the fact that the growth is found on dead or dying trees, as well as on those that are alive, many casual observers wrongly assume that it alone is responsible for the death of the trees. The lichen does not however derive nourishment from the timber, and will flourish as well on a stick. It is an air plant, and perhaps prefers dead wood, or trees that have been attacked by insects, because on such there is less foliage to hinder its spread.”

In the foreground of our shots of Mount Rainier is Nisqually Glacier. This shows the geologic evolution of a glacier. At the top is the hardpacked ice and snow that lasts from year to year (unless global warming has a more drastic impact). A bit lower in the glacial valley, the ice is still there, but it’s brown because of the bits of rock that has been ground off the mountain and blown onto the ice. As any of this ice, or the fresh snow on top of it, melts, it trickles over the glacier and collects under it, carrying glacial flour to create a rush of gray water cascading over rocks to create a small stream which joins others to create a major river. Note the valley in front of the glacier was carved wide and deep when the glacier extended farther into the valley. It is constantly in motion. In May and June of 1970, the front advanced at a rate of two feet a day!

The brown triangle and everything behind it  is dirt-covered ice.

Nisqually is one of 26 glaciers surrounding Mt. Rainier. It would take more climbing than we were prepared to do (ever!) to see most of the others, which are on other areas inaccessible by car. At about 10,000 feet Camp Muir is a base camp shelter built of rock. This is named after the naturalist John Muir, who climbed Mt. Rainier in 1888 when he was 50.

Descending (by car), we once more appreciated the work by the National Park Service in making these sights accessible. The 83-mile Road to Paradise offers views of the mountains, waterfalls, canyons, and beautiful foliage.

Note the rockslide areas above…and below the road cutting across the mountainside.

We ended the day with one more view of the cloud magnet, Mt. Rainier.

On many days you don’t even know the mountain is there.

Did you know? Mount Rainier has had other names. Native Americans are campaigning to return to a version of the original, Tacoma. While that issue prompts big debate, for Super Bowl weekend 2014, Mount Rainier was officially renamed Mount Seattle Seahawks in Washington State Senate Resolution 8676 (very entertaining!), making the whole park a powerful 12th man for the team. It worked. Seattle won. Watch to see if this happens again next time Russell Wilson takes the team through the playoffs.