After visiting the old town of Buenos Aires, the wilderness of Patagonia, and the wineries of Mendoza, Santiago seemed different. It is a modern city, with highrises and chic neighborhoods. 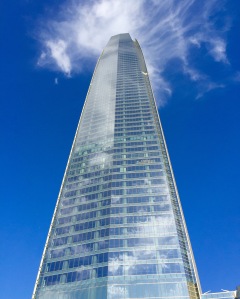 Built in 2012, the Costanera Center, at 64 stories, is one of the tallest buildings in the Southern Hemisphere.

…and every U.S. chain imaginable. TGIFridays remains TGIFridays here, not TGIViernes! There are also Domino’s, KFC, and McDonald’s. In fact, the interiors of the large malls are practically indistinguishable from those in Charlotte, North Carolina. The world has morphed toward sameness in many respects. 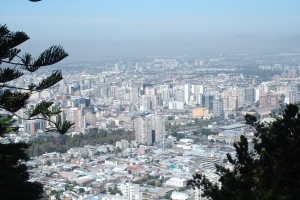 View of Santiago, sprawling into the haze.

We climbed to the top of a mountain right in the city for that view. It’s Cerro San Cristobal with a 60-foot tall statue of the Virgin Mary. 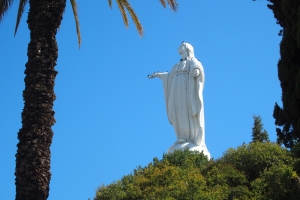 Rio de Janeiro has Christo Redentor and Santiago has His mother.

Like all the other cities we’ve visited, Santiago has a fresh market. 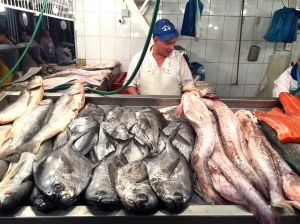 The sights and smells (but no sounds!) of fresh fish at the market in Santiago. 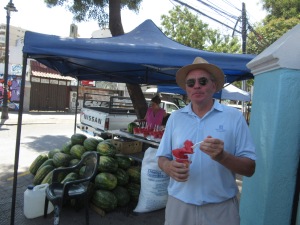 Chile is on the Pacific Rim, earning its position on the Ring of Fire with regular earthquakes. One of the biggest earthquakes in history was in Chile in 1960. Santiago has seen significant damage in recent quakes in 2010 and 2015. Yet the city continues to rebuild and thrive. There were many museums. Some are quite old, such as the National Museum of Fine Arts, established in 1910. 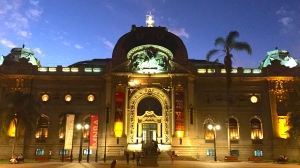 A twilight view of the Palace of Fine Arts.

The temporary exhibit during our visit was interesting: (En) Clave Masculino, a play on words of both enclave and key to the masculine gender. It included works of male identity and power and submission. Not your typical still lifes and landscapes. 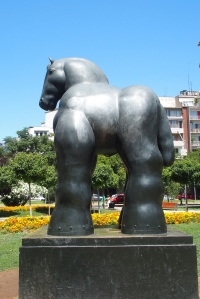 Fernando Botero’s statue The Horse is strikingly modern outside the Palace of Fine Arts.

We visited a museum without art, but rather a history focus, the Museum of Memory and Human Rights.  Memory is important in issues of human rights. As George Santayana said, “Those who cannot remember the past are condemned to repeat it.” This museum is focused on the atrocities during the reign of Auguste Pinochet, and it includes an international section highlighting more than 20 recent and ongoing human rights struggles across the world. 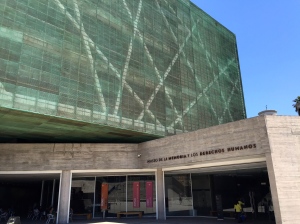 The Museum of Memory and Human Rights in Santiago Chile

The Museum of Memory and Human Rights was initiated by the one-time and current President of Chile, Michelle  Bachelet, who was one of thousands detained and exiled during the Pinochet regime, while in her early 20s. 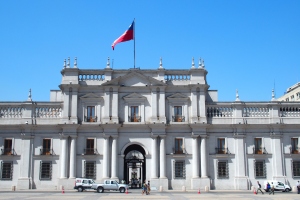 The Palacio de Moneda, seat of the Chilean government as it looks today. 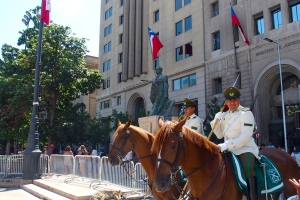 The changing of the guard at the palace is on horseback.

On September 11, 1973, the Palacio was attacked in a military coup. Salvador Allende was the president, a Marxist who had lost the support of his legislature and was seen as ruling by decree, trying to gain absolute power. 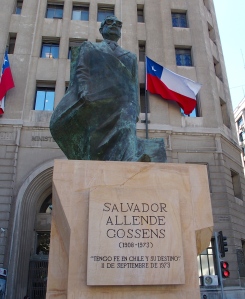 A statue of Allende near the palace (no statue of Pinochet)

By 7 a.m. the Chilean navy had captured Valparaiso and tanks surrounded the palace in Santiago. 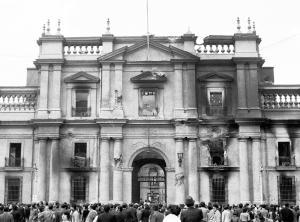 Palacio de Moneda on September 11, 1973. Note the smoke from the windows.

By 2 p.m. the coup was complete and President Allende had committed suicide (or been assassinated. Conspiracy theorists continue to debate this.) An audio timeline of this fateful day is one of the primary exhibits in the museum. The lead-up to the coup was aided by U.S. economic  warfare and CIA intervention under Nixon’s direction. 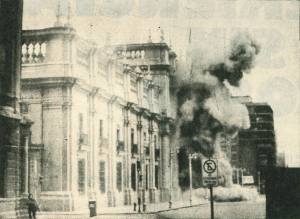 The photo we would have seen in the papers in 1973.

However, Chile jumped from the frying pan into the fire when Augusto Pinochet took over after the coup. His was a brutal rule of torture and disappearances (and probable deaths) for those who opposed him or presented supposed threats.  The museum records that in September 1973 there were 598 dead, 274 missing and 19,083 detained and tortured political prisoners. The Truth Commission’s final report documented 3,428 cases of disappearance, killing, torture and kidnapping between 1973 and the end of Pinochet’s rule in March 1990. 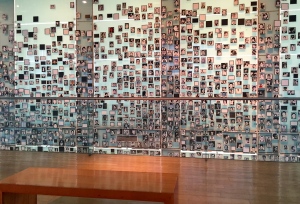 Pinochet’s known victims are cataloged in the museum with names, photos, and any available information on disappearance or torture. ¿Donde estan?

Since Pinochet’s departure 25 years ago, Chile has recovered a strong democratic position. In The Economist’s  assessment, Democracy Index 2015, Chile is ranked 30th of 165 countries. Interestingly the United States is at only 20 in the rankings and dropping dangerously close to the “flawed democracy” category over the last 10 years. The lowest contributing factor in the U.S. ranking is political participation. So in this major election year, get out and vote!

This entry was posted in Travel Journal and tagged Chile, Human Rights, Santiago. Bookmark the permalink.

2 Responses to Santiago, a modern city with fascinating recent history