Valparaiso = Colorful in Spanish (not really, but it could)

From the modern city of Santiago to the old cobblestoned streets of Valparaiso is only a couple hours by car, but the differences are huge. Google Maps led us up twisting, turning narrow streets that reminded us of the nearly impassable lanes in St. Tropez, only these were at 45 degrees (and in a manual transmission car!) 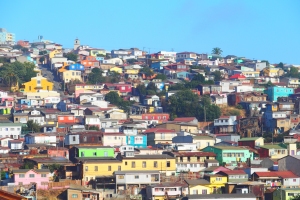 The colorful cityscape of Valparaiso built nearly vertical from the sea.

The whole town of Valparaiso is drenched in color. Like the bright pastels on the attached homes in Cinque Terra, these buildings seemed to have varied colors to make it easy for one building to stand out from its neighbors when viewed from the sea. 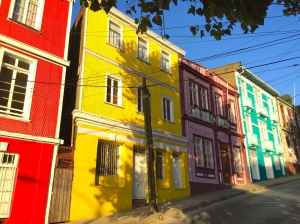 Do you have a favorite color? Blue, red, orange. OK, that’s what you paint your house.

While some buildings have a single color, any open outdoor wall space seems to be covered with creative artwork. 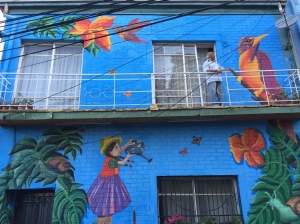 Step out onto your balcony and into the rainforest. 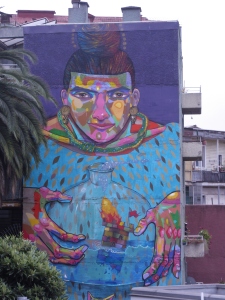 Could this be Frida Kahlo on the side of a building?

It’s important to look all around, side to side, up and down, and behind you so you don’t miss any of the artwork. 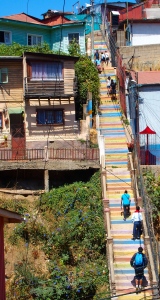 It’s a long hard climb, but at least it’s a colorful one on the way up.

Some art work is functional. 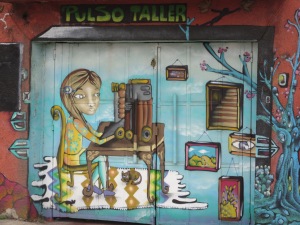 Pulso Taller is a clothing and handicrafts workshop.

Much of the art has some symbolic meaning, whimsical or serious. 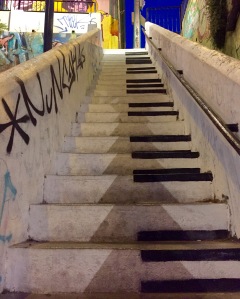 Can you find middle C?

At the top of the piano-key stairs were some musicians. 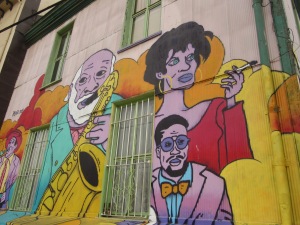 We overheard a tour guide saying the woman was Whitney Houston. Maybe. Not sure who the others are.

These stairs also led to the Lutheran Church (not too many of those in Catholic Chile). In a five-minute walk we saw the next three: 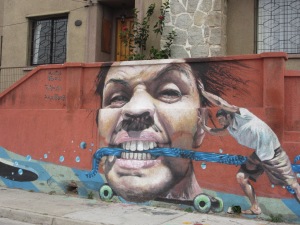 A man pushing his head uphill on a skateboard while he bites on a blue rope. What is the meaning? 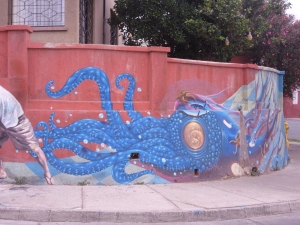 Wait. It’s not a blue rope. It’s an octopus tentacle. Now the meaning is clear, right? 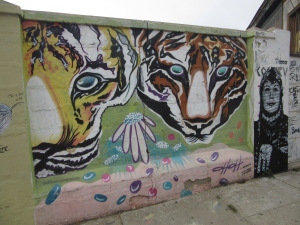 As Valparaiso is often described as an artists’ colony, it has attracted folks from around the world to live and create here.

We wonder if someone from California’s early hippie days escaped the U.S. and set up a home here in Valparaiso.

In addition to its artsy lifestyle, Valparaiso is also a maritime city. The beautiful building of the Armada de Chile (Chilean Navy), stands tall near the center of the town. 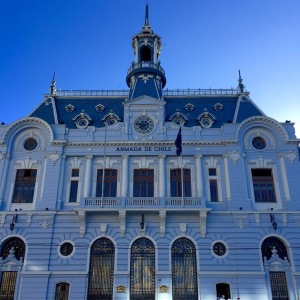 Looking out from the Navy building, you don’t see a pretty sailing port or beach, however. Instead, it’s a busy cargo port. 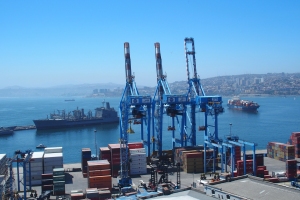 Not the greatest view. 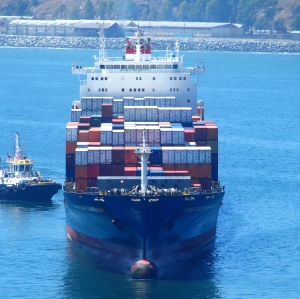 But a very important port for bringing goods into and out of Chile.

On our trip to Valparaiso, it wasn’t boat transportation that caught our attention, but bike transportation. Actually not so much transportation as competition. We were there on the day of the Cerro Abajo, which means”hill down” and is an amazing downhill bike race. (See some good videos at Cerro Abajo.) Crowds gathered in one of the town squares at the bottom of the hills to see the bikers. Some riders are quite the celebrities. Not yet knowing what we were watching, we expected to see the bikers leave from the square, pedal up the hills, and race back down. Not so. They were taken away by car and truck in a caravan parade to the top of the hill. 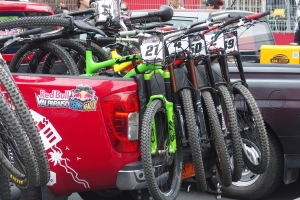 What goes up will come down.

We were left to find our way uphill to see some of the action coming down. If the stairs are too much, it’s easy and affordable to find a funicular or ascensor. 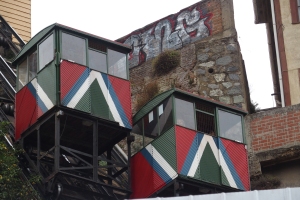 About 60 cents to ride this “train” up the hill instead of taking the steps. And well worth it at the end of the day!

We hadn’t quite reached the top when we heard loud banging noises. Fans “rang” their support with pieces of pipe inside metal wheels. 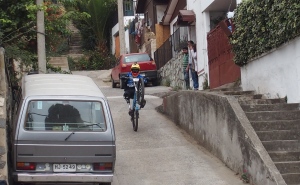 Look closely. This guy doing a wheelie has artificial legs.

They rode down steps. 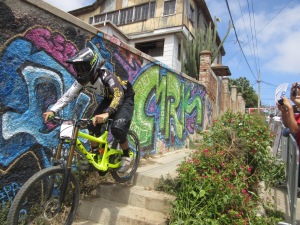 Biker with flowers on one side and colorful mural on the other…and stairs underneath.

They made sharp turns. 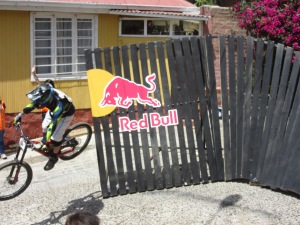 Quite the banked turn added to prevent crashing into buildings. 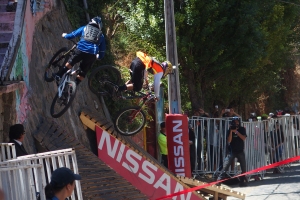 Go up and down a ramp and ride sideways for a bit. One enterprising biker chose to jump the tape instead. He cleared it.

Some streets of Valparaiso are literally above adjacent streets by 20 or 30 feet. No problem for the bikers. Organizers install take-off and landing ramps and the bikers sail through the air. (Like watching the bike scene of E.T. when the kids floated up in front of the moon.) 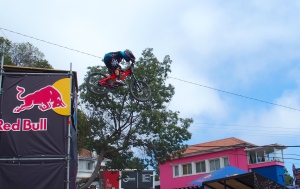 Whee! Or maybe OMG What have I done?

The grand finale brought the bikers back into the square. But first they had to jump the curb and maneuver into this small garden space, and fly out over the gap for their final down ramp amid the cheering crowd. With the main street down blocked for the racers, we were still up the hill watching and trying to find a way down without having to climb up numerous steps first. (Valparaiso is all hills.) 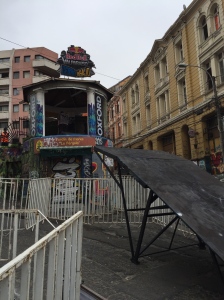 Between one night when this ramp was installed and the next day when the race was to be held, some artist had spray painted white images onto the black. Sponsors didn’t like that so one pre-race activity was repainting the ramp.

A short distance from the naval building is the cemetery. This too is colorful. While some of the flowers are plastic or fabric, most are fresh flowers. We were there on a Sunday and many families were in the cemetery tending the graves, replacing flowers, and having little picnics with their deceased family members. 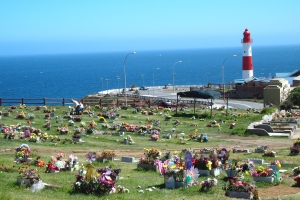 The dead in Valparaiso have a peaceful setting overlooking the blue Pacific Ocean.

Some of the crypts in the cemetery are more than 100 years old, 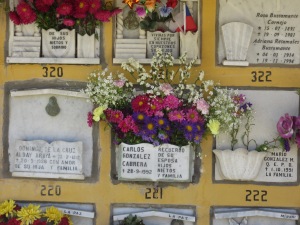 Pretty fresh flowers on many of the more recent crypts.

But many of the graves on the lawn are more recent. This was the grave of a seven-year-old girl. It appears that her favorite color was purple. She has dozens of Disney characters and flowers to keep her company forever. Someone loved this little girl dearly. 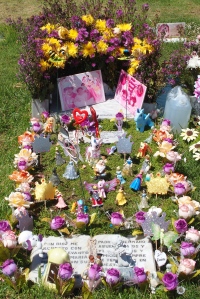 In eternity, surrounded by playthings and words of love that brought her joy.

By the way, “Colorful” in Spanish is “Vistoso.” Change a few of the middle letters and it is Valparaiso.