Beef. It’s what’s for dinner in Argentina. Much more, of course.

We went to a top-rated restaurant early in our stay in Buenos Aires. It’s called The Argentine Experience and sounds like a touristy activity, but it was actually very helpful. For example, we learned that you can make more wine cocktails besides just sangria. 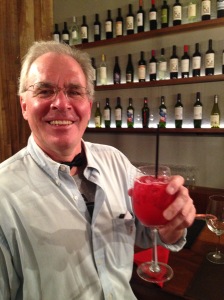 Michael with his Razzisima cocktail of raspberries and rose wine.

We also “made” empanadas (actually we just put the already prepared filling into a shell and sealed it). However, we learned something about empanadas. The flat ones are generally meat filling and the taller ones are cheese, upright so that the cheese doesn’t leak out.

Carne (meat) empanada at the back and queso (cheese) at the front.

Next we learned how to order beef in Argentina, very important. While the beef here is excellent, if it’s overcooked, it’s much like any other overcooked meat anywhere. So we learned to order the level we like of medium rare (juguso = juicy) vs. medium (a punto = to the point).

Success! When we visited one of several parrillos (steakhouses), we did, in fact, get nicely grilled medium rare lomo (tenderloin) steaks. Yum!

You might ask, “Do Argentineans eat vegetables?” Yes, they do, but you need to look for good salads and sides. The ensalada (salad) is typically served with just oil and vinegar for a DIY dressing. One simple salad was spinach or lettuce with blue cheese and walnuts, quite tasty. Olives are popular here too.

An excellent tomato and avocado salad from 1884 Francis Mallmann in Mendoza. The secret: a little sugar in the salad dressing.

Even the pizza is good, probably because of all the Italians living in Argentina. Estimates are as high as 60% of the population, or more than 25 million, for the number of Argentineans who have Italian heritage. That means good Italian food choices here if the beef gets to be too much. The helado (ice cream) in Argentina is a lot like the gelato in Italy too. In Buenos Aires, helado is available on almost every street corner, just like gelato in Rome.

Almost every pizza comes with olives.

We visited an interesting restaurant in El Calafate, Isabel Cocina al Disco, highly rated and very affordable for all the backpackers. We weren’t in the mood for loud disco music, but we stopped in to see what the appeal was. It turned out the “disco” was not music, but a”disk plow” that in this case was used for traditional cooking. It’s a flat round cast iron pan that could be used over a camp fire by the gauchos. The food created in that disk was great, described appropriately as having grandma’s stamp of approval.

Scott, one of Nancy’s US clients, said that we MUST have a cappuccino and alfajores in Buenos Aires. We took his advice, not once, but many times. What’s an alfajore? The most delicious sandwich cookie, with a variety of wafer tops and bottoms and dulce de leche in the middle, then often dipped in chocolate. (The alfajores in El Calafata had calafate jam in the center.: And the cappuccino here often has a chocolate and even a dulce de leche layer.

Scrumptious cappuccino from Llao Llao in Bariloche. Another bit of Italian influence.

Once we discovered alfajores, we scoured the streets looking for confiterias where we could purchase these by the quarter-kilo (about a half pound!) Apparently, we aren’t the only people in Argentina with a sweet tooth. Every hotel breakfast included medialunas, sweet croissants, along with half dozen types of dulce de leche cookies, bars, and other treats. Lots of lemon meringue pie for breakfast! 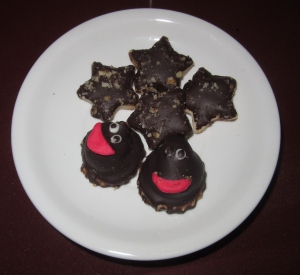 The alfajore with a face is actually a mountain of dulce de leche covered with chocolate. It looks a bit like the chocolate “god” we had in Grasse.

Traditionally, Argentineans drink mate tea. This is a somewhat bitter (to us) tea that is extremely strong. The mate cup is stuffed nearly to the top with dried tea leaves and has a metal sipping straw. Then small amounts of hot water are added to the tea…over and over again. We saw lots of folks walking around with their metal thermoses of hot water so they could drink their mate all day. 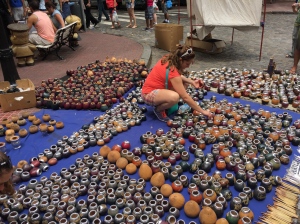 Acres of mate cups for sale at the markets.

All this food needs to be accompanied by wine. We found some really great wines on our trip to the wineries of Mendoza. Stay tuned…

2 Responses to Our Argentinean Food Experience