The mighty Colorado River, complete with dogs on paddleboards

The Colorado River starts as a small stream in northern Colorado, grows wider and grander through several states and ends up small once more, with not enough water for all its users’ demands when it reaches California and Mexico. We’ve followed the river’s path on the western leg of our trip.

The Colorado actually starts north of Denver, not far from Estes National Park and Fort Collins, which used to have a large Kodak manufacturing plant. Then it travels about 200 miles southwest, where we met up with it in Glenwood Springs outside of Aspen. 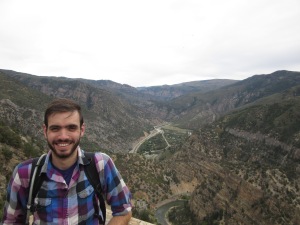 Here it joins the Roaring Fork which flows in from Basalt, where Pat and Jordan live. We could look down on the combined rivers and see people floating along in blue or yellow rafts.

A beautiful day for a raft trip

Glenwood Springs Adventure Park is 1,300 feet in the air over the rivers. Pat did a quick ride on the alpine slide.

The Colorado meandering south after teaming with the Roaring Fork. Patrick racing downhill. Look Ma, no brakes the whole way.

The Colorado flows down through Utah, passing the red, iron-rich sedimentary rocks that were once under an inland lake. Spring snow melt means rapid currents and rough whitewater. Now in September, the waters are fairly mild, but still with some thrilling rapids.

A lot of this raft trip was a “lazy river” ride with the guide steering and the current floating the raft. The temperature was pushing 90F.

We had several rafting experiences at the National Whitewater Center in Charlotte, a good simulation of real rapids. When whitewater is visible, the boat guide shouts, “Paddle, paddle, paddle!” and all the passengers paddle like mad, falling into or out of the raft. Meanwhile the guide seems to use this moment for a bit of a rest.

In the old days, river runners used dory boats, rafts, and kayaks. In recent years, as on Keuka Lake, paddle boarding has gotten popular. Much of the river is calm enough to stand and paddle or just float with the current.

Paddleboarders on the Colorado River near Moab. Click to enlarge to see who is wearing red.

But the Colorado River rapids are a bit more treacherous than the boat chop on Keuka Lake. These experienced paddlers–and their dog–dropped to their knees to get through the rough patches.

On the calm waters just after this rough section, the paddler went into the drink. So did the dog in its red vest! While the man struggled to get on the board in the river current, the dog swam to the edge of the river and started running happily along the shore. He didn’t seem to want to get back on the board. He was probably bored.

The river goes on and the cliffs are more sharply defined. These are near Mendocino Utah. 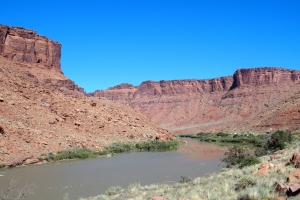 In 1963, the U.S. Bureau of Reclamation completed construction of the giant Glen Canyon Dam across the Colorado gorge at the northern part of Arizona, just south of Utah.

This formed Lake Powell, a massive reservoir that not only stores water for agricultural and municipal uses, but is a popular spot for boating, specifically houseboating.

Boaters get up and down to the dock by golf cart on a long ramp to the water of Lake Powell. The lake is about 100 feet lower than past levels.

The dam was controversial when built. Fifty years later, the Glen Canyon Institute and many other groups continue to advocate for removing the dam. Just south of the lake, the river once again becomes a shallow flow in a deep canyon.

The Colorado River in Horseshoe Bend

We bypassed the Grand Canyon on this trip. But we visited it several years ago. It probably hasn’t changed much since then.

That tiny river carved through all these layers of rocks.

The canyon is 4,000 feet deep. Pat and Jordan hiked down and back in one day over Labor Day. Crazy kids! 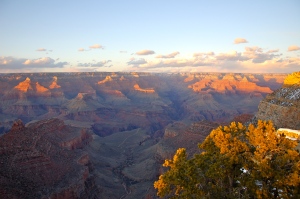 The Grand Canyon (from February 2010)

The Grand Canyon and Colorado River trail through much of northern Arizona. Finally at the Nevada border, the giant Hoover Dam creates Lake Mead.

The Hoover Dam, a stimulus work during the Great Depression. Note the old high water marks on Lake Mead behind it.

We noticed that Lake Mead’s water level was extremely low when we visited last spring, so much so that the lake surface was less than 30 feet above the water intake for Las Vegas, with levels continuing to drop.

Six years ago work was started to install an additional water intake 190 feet below the existing one, giving Las Vegas some breathing space, or drinking space in this case. The project was completed just this week. Read an interesting description of how the work for the new water intake was accomplished as a 3-mile-long tunnel more than 600 feet underground.

The line of white shows Lake Mead water level in past years.

The water that remains in the river continues on toward Mexico. After 1,450 miles and millions of water users, very little flow is left when the Colorado approaches the Gulf of California in Mexico. It rarely makes it there and the Colorado Delta is now just a dried sediment flat.

Las Vegas, Los Angeles, Phoenix and other cities pull water from the Colorado River for agriculture, manufacturing, landscaping, and of course showers, cooking, and drinking. With global warming causing less snowmelt entering the river and increasing user demands causing greater pull from the river, many of these areas are on permanent water restrictions. One of these cities pulling water from the Colorado is Palm Springs. And that is where we’re heading next–after a short stop for more red rocks in Sedona.