Avignon, where popes once reigned

For 68 years during the 1300s, Avignon was the center of the Catholic world. Seven popes reigned from this Provencal location, nearly 600 miles from Rome…and they were French, not Italian. The Palais des Papes, papal palace, still stands as a glorious fortress in the old town of the large city. 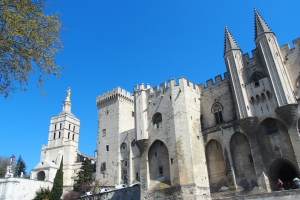 The Palais des Papes has over 160,000 square feet of space, one of the largest Gothic buildings in Europe.

Next to the papal palace is another impressive sight, the Cathédrale Notre-Dame des Doms d’Avignon. The structure was built in the 1100s and has been the home of the archbishop of the Avignon diocese/archdiocese since then.

A gilded statue of the Virgin Mary stands atop the bell tower of the cathedral.

An interesting juxtaposition of a gargoyle on the papal palace and the Holy Mary on the cathedral bell tower just beyond.

The statue of Mary was added in 1859 and the gilding has held up remarkably well. 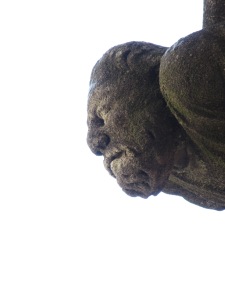 Some of the original stone gargoyles on the palace are showing wear…or they were not very good-looking to begin.

Avignon’s papal palace is now part of a UNESCO World Heritage Site along with the old town itself and the Avignon Bridge.

The very large entry door glows with a light from within. 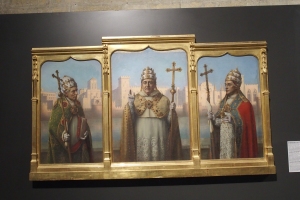 Several of the popes who reigned from Avignon. 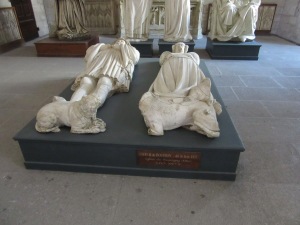 This is Louis II of Bourbon, said to be mentally unstable. Interesting that his wife and dogs are here but not named. The wife is Anne of Auvergne and the dogs may be Le Sunny I and Le Sherlock II, ancestors of SBBS’s best sleuthing pups.

The interior of the palace shows not opulence, but immense size.  The Grand Tinel was used for receptions. Popes were elected in this space. 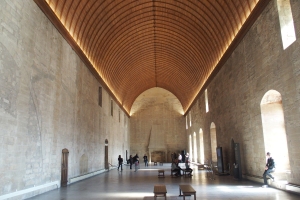 A large fire damaged the tapestries inside the Grand Tinel soon after the palace was built. The ceilings are more than 50 feet tall.

The popes worshiped in the Grand Chapel. Coronations and funerals were held here.

Much of the detail of the stonework remains in the huge arches, but many of the heads were knocked off during the time of the French Revolution.

Inside the palace are many friezes, some remaining from the original decoration. 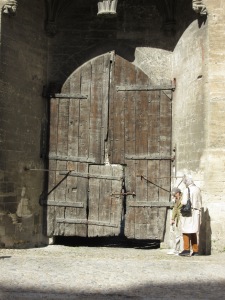 The palace door offers humble access to the outside world.

In 1378, the papacy returned to Rome. But in the 39 years now known as the Great Schism, Catholic leaders in both Avignon and Rome claimed to be popes. By 1417, the schism was ended with the excommunication of the reigning Avignon pope. Later the Avignon leaders during the schism were declared as antipopes.

Avignon now has a population of over 90,000 people, making it one of the largest communes in Provence.

Like other Provencal towns, Avignon has a mistral bell. 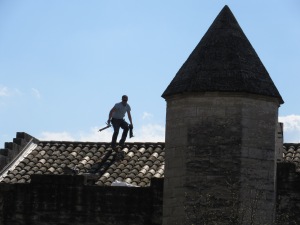 A workman makes repairs on an orange-tiled roof near the palace.

From the garden near the palace is a perfect view of the Pont d’Avignon or Pont Saint-Bénézet. The story of this bridge is that a young shepherd, Bénézet, received instructions from Christ to build a bridge across the Rhone River. The original bridge was completed in the late 12th century. Bénézet was granted sainthood for performing not three, but eighteen miracles, one of which being the lifting of the first very heavy stone to start the building of the bridge. The bridge was rebuilt once after flooding destroyed parts of its 22 arches. When it was partially destroyed again, the western side was abandoned.

Some of the remaining arches of Pont Saint-Bénézet over the Rhone River in Avignon.

Bénézet was originally interred on the bridge. After the bridge was damaged, his remains were removed for safekeeping. His body was incorrupt, showing no signs of decay. 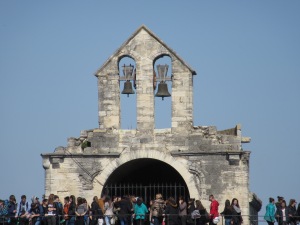 Many  worshipers make a pilgrimage to the small chapel on the bridge.

Les Halles, a large shopping market, has an interesting outdoor “living wall” with more than 400 species of plants.

With the ancient buildings and history as a backdrop, Avignon is a great place to simply relax and enjoy Provencal sun.

Feeding pigeons in the park.

2 Responses to Avignon, where popes once reigned