This time Aloha means goodbye. We’re reluctant to leave. Hawaii is such a beautiful place. The people have been extremely friendly. It’s the practice of “Mahalo.” While we often hear people using this word to say thanks, it really means so much more, the act of showing respect. Aloha actually means something similar: affection and peace. The government has signs saying “Drive with Aloha,” encouraging people to show respect for other drivers and pedestrians.

Not all of Hawaii is peaceful, as we saw in the volcanic flows near Pahoa. Pele, the goddess of the volcanoes, resides in the Halemaʻumaʻu crater in Kilauea volcano. We didn’t witness her violent rage, but did see gentle puffs as she breathed while sleeping. 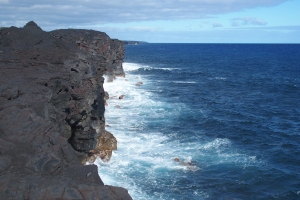 For centuries,  Pele has released red-hot lava over the edge of the land where it hisses as it flows into the ocean. Now the sights and sounds of the cliffs, the ocean, and the wind are mesmerizing in a different way.

While the people of Hawaii are friendly, the land itself is also beautiful, showing peace and harmony in the harshest conditions. The brilliant blue ocean and raging surf create constantly changing views along the rugged shoreline. Even the hard black lava has beauty. Over years and years of pummeling, rock-hard lava will eventually wear down, sometimes creating unusual shapes. 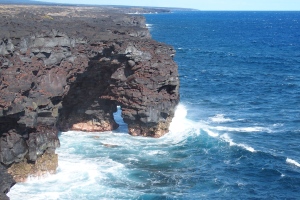 A couple days before we arrived, a major storm hit the area, causing downed trees and power outages. A 75-foot yacht was overturned and washed ashore. Three of the four crew on board survived on a life raft. Now the search for the fourth sailor has been abandoned. 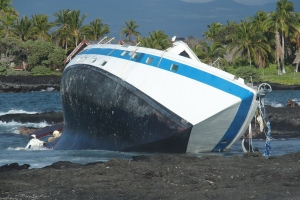 Imagine the storm that overturned this big boat and the strength of the waves that pushed it onto shore.

As we saw in the botanical garden, Hawaii has many beautiful flowering plants. One of the most famous is the ohia tree, with its delicate red lehua blossoms. There is a story behind it. Pele fell in love with a man named Ohia. He, however, loved another girl, Lehua. Pele transformed Ohia into a tree, considered rather ugly. Lehua begged Pele to change Ohia back to a human, but to no avail. Lehua turned to the other gods. They acted, but in a different way. Lehua was changed into a beautiful red flower to decorate the ohia tree. When anyone picks a lehua blossom, rain will come, the tears of Lehua upon her separation from Ohia. 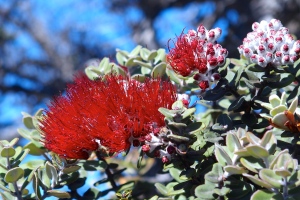 The delicate lehua blossom on the ohia tree.

We were constantly amazed by the views and scenery across the island and up and down its elevation. 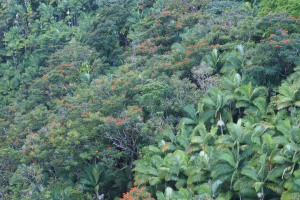 Here we’re looking down on lush vegetation, full-sized palms and other trees. 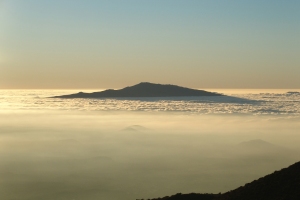 This “island” is actually the top of the dormant volcano cone behind Kona. From the top of Mauna Kea, we watched the sun set into the clouds.

It’s hard to believe that all this beauty is built on lava. 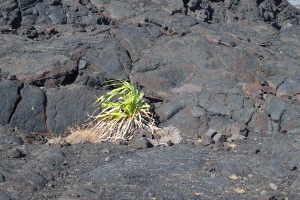 This is how life starts in the lava field. 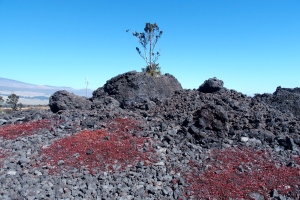 And it spreads and blossoms. 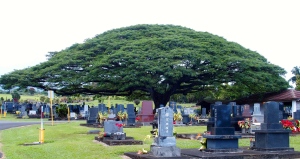 Eventually beautiful trees appear, like this monkeypod in the Alae Cemetery north of Hilo.

And the island has become a unique paradise.

Can’t get over this contrast of palms and snowcapped mountain.

A beautiful spot to launch our 2015 adventures. 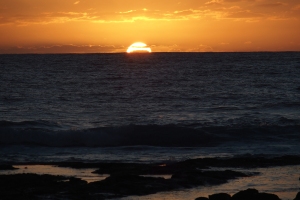 As the sun sets, we say “Aloha” from Hawaii.