Here’s a riddle: How could we have visited Hawaii before, but never been to Hawaii? Answer: On other trips to the state of Hawaii we visited the islands of Kauai and Oahu, but this time we are on the Big Island, which has the official name of Hawaii. We’re spending four days in Kona on the west and four days in Hilo on the east.

This island is rather big, both in diameter and in elevation. We drove north along the western coast and had views in one direction of beautiful blue seas… 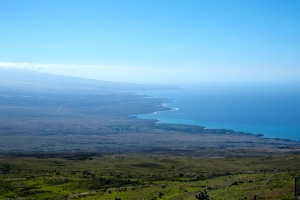 The Kona coast, looking in the makai (ocean-facing) direction

and in the inland mountain (mauka) direction we saw snow-capped Mauna Kea. At 13,803 feet above sea level, it’s the tallest mountain in the world (because its base is 20,000 feet below sea level). People are snowboarding at the top this week, although the peak has warmed to 37F so snow is melting. 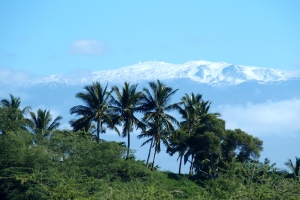 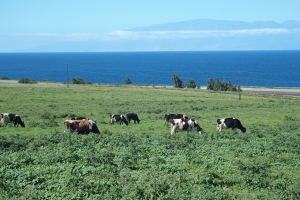 Kau may not be the real local spelling, but a more special name seems appropriate for these cows that have such a fantastic view. 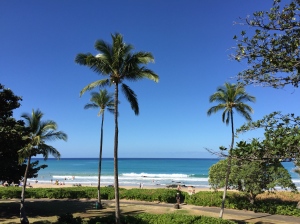 Just another day in paradise

This is a honu or green sea turtle, very important in local lore. They’re slow on land, but swim much faster than we do…as we learned while snorkeling.

We found lava, not the fresh stuff that is threatening parts of the island, but rock that is many years old, but now supporting plenty of plant life. 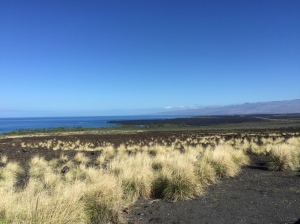 We were told that this harsh black rock is actually very fertile. 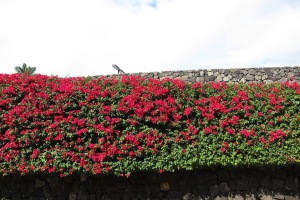 Like much of the amazing lush vegetation in Hawaii, this bougainvillea was imported. Notice how it grows quite nicely next to the igneous rocks.

We found hibiscus like we had in St. Thomas decades ago when we became engaged. 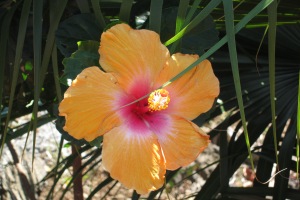 A hibiscus flower behind your right ear means that you are single and looking for a mate. If the flower is behind your left ear it means you found one. Michael refused to wear his. What does that mean?

Finally we found a quiet cove for snorkeling… 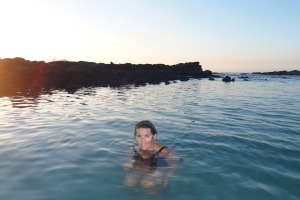 Two couples were having wedding photography done here (with us in the background).

and the home of Kona beer 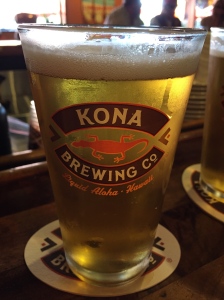 This one is for the Pats.

The end of a lovely first day 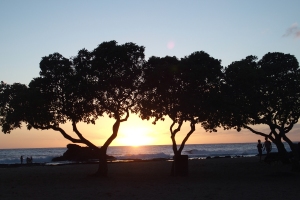 First of many Hawaii sunsets.

And we have much, much more to come!