We spent the whole month of December in Truckee California, near Lake Tahoe, Donner Lake, and Donner Pass. More friends and family, good food, good wine, and some skiing at Squaw and Alpine Meadows.

The Oregon Trail, which we visited earlier on our trip, was rugged but pretty reliable in getting folks out to the west coast safely. In 1846, following an unvetted tip in a guide book, The Emigrants’ Guide to Oregon and California, written by Lansford Hastings, the Donner Party took a short cut through Utah and the Sierra Nevadas with tragic results.

If only there had been crowd-sourced travel tips back then, this wouldn’t be a memorial.

An early October snowstorm trapped the Donner party for the winter in California, but on the east side of the Sierra Nevadas, just 100 miles from their ultimate goal. 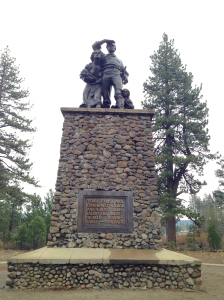 Of the 82 people in the Donner party, only 48 survived.

This is the dreaded pass that they had to cross. We’re seeing it in early December with just a dusting of snow. (Global warming?) They had drifts of snow up to 60 feet tall.

In fact our time in Truckee was so mild that Michael had clear roads to ride a bike from Donner Lake only three miles up to the pass, but with an elevation change of 1,162 feet, in the cold, with wind chill and ghosts.

King of the Mountain. Not officially, but when there is no one else out there to challenge you, claim it.

Back to the Donners: When food supplies ran out, they ate any remaining oxen and horses. When those were gone, they chewed on the ox hides they were using for roofing and boiled animal bones. When that was gone…cannibalism. Apparently it was suggested by a very practical seven-year-old. It appears that most of the people who became food had first died naturally under the hardship conditions, but one or two may have been killed.

Time for a good family discussion: What would you do if faced with the conditions experienced by the Donners?

At the ski hill, Squaw, home of the 1960 Olympics, Michael had his choice of parking spots…

his choice of ski racks… 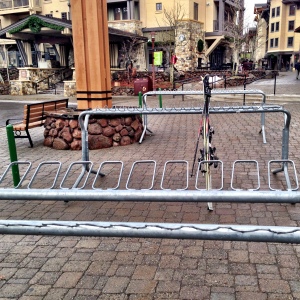 and his choice of lift seats. 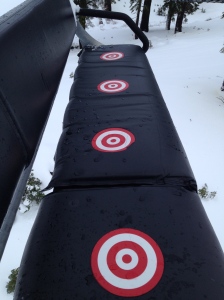 Skiing was a bit limited early in the month, which made hiking feasible. 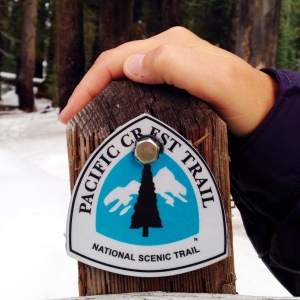 If you’ve read Wild:From Lost to Found, this is part of the trail that Cheryl Strayed hiked and wrote about.

Only about a foot of snow and clear skies, very hikable.

In fact, the weather seemed warm after a while. 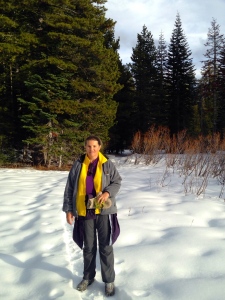 I was delayering to cool off. The Donners delayered to eat their clothing.

After Mother Nature, with some help from snowmaking guns, added to the mountains’ base layer of snow, it was finally time for good skiing at Alpine Meadows.

Did you know that in 1980 Kodak patented the use of ice nucleating organisms in snow-making machines to increase the opportunities to make snow under a broad range of temperatures? Snomax

Still not many folks skiing. 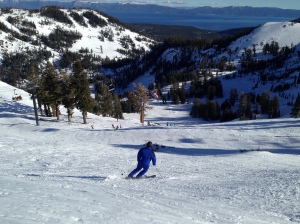 Those who braved the cold posed for the traditional shot at the top.

Too many folks to see through to the lake in the background.

The affianced couple with Lake Tahoe behind them. Just two months ago they were in Greece.

Good conditions bring out the crowds.

Six O’Connells on one chair.

Action off the ski hill: 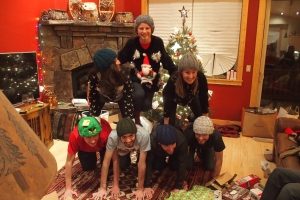 Seven O’Connells on one pyramid. (It was easier when everyone was smaller!) Remember when Brian was on the top. Now he’s 6’4″. BTW Thanks to Meghan for making all the hats Love them!

And finally more holiday dinners with family and friends.

Stephen’s long arm is enhanced with a selfie pole extension.

So ends Tahoe. Thanks to Stephen and Kathy and Tom and Allison for your gracious hospitality, as always. We loved having an extended visit and being able to spend time with family.

Now it’s off to Hawaii and back to the grind of worldwide travel.