Sonoma – the other wine valley. Starting November 1 and still going

Two years ago we celebrated another Christmas with California O’Connells and decided that it would be great to move to Sonoma when we retired. So here we are, moved to Sonoma…for one month. 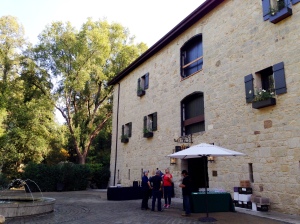 This is actually the oldest premium winery in Sonoma, self-proclaimed “The Pioneers of the California Wine Industry.”

We happened to hit the annual cellar sale at Buena Vista as guests of Stephen and Kathy who are members. You pick up a glass and then go from table to table to sample $5, $10, $15, and $20 wines, with no tasting fee, a rarity here. We bought a few and Kathy bought a lot, so I guess they recovered their non-fees. After that, we did a for-real tasting and bought another couple, not just because we were tipsy, but because the wines are so good. Our favorite: the Pinot Noir and Zinfandel (too hard to choose just one).

We went back to Buena Vista on our bikes (about 3 miles)  a couple days later to see everything we missed on the tasting tour and take more photos.

The path into the winery is lined with the history of wine according to BV, with life-size cutouts of the main players. It all starts, of course, with Bacchus and Dionysus, the Roman and Greek gods of wine. (Interesting that both cultures created wine gods. I wonder if there would be a god of marijuana if the myth-makers were around now.)

Bacchus and Dionysus, other gods of wine

Along the path, our friend, John Jacob Astor, showed up. He had a big influence on places we visited earlier on this roadtrip: Fort Astor/Kamloops and Astoria Oregon. It isn’t clear why he belongs at the winery, however. (Or Leif Ericson either, but he’s here.) Astor is credited as being the first multi-millionaire in the US; maybe drinking wine every day helped him live long. He died at age 85.

The founder of the winery, and pioneer of wine in the region, was Count Agoston Haraszthy de Mokesa (Hungary).  Interestingly, his first home in the US was in Wisconsin, where he established hops growing, eventually supporting the start of beer production. The area was too cold for wine grapes (think: frozen tundra), so he headed west on a 9-month wagon train ride to find a friendlier terrain/terroir.  He established his Sonoma winery in 1857, making Buena Vista (Good View) the first premium winery in California. 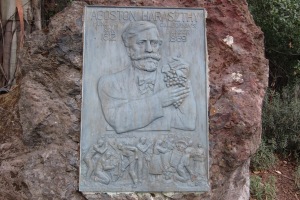 Agoston Haraszthy, with his beloved grapes

Along with his hops farming and wine making, Count Agoston was also a metal assayer during the gold rush (and accused of embezzlement), a sheriff in San Diego, and a member of the State Assembly. A true Renaissance man. His biggest legacy, though, is his buen vino (good wine).

We found one more “What is he doing here?” piece of art.

Lion in the BV tasting room? Anyone know why? We’ll just have to go back to find out.

Just two miles farther, we found Gundlach-Bundschu (pronunciation rebus guide: gun-lock-bun-shoe), which is the oldest continuously family-owned winery in California, now in its sixth generation. Note the fine print: slightly different claim from BV’s, but another long and interesting history.

Gundlach-Bundschu, established 1858 (a bit before this truck was manufactured)

Jacob Gundlach bought the land on March 12, 1858, named it Rhinefarm, boated off to Bavaria to get married, and brought back vines acquired on their honeymoon. 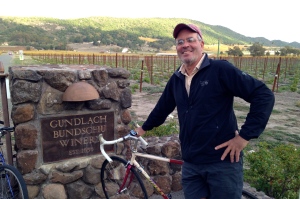 The name comes from Bundschus marrying into the Gundlach family. The other entry post is labeled Rhinefarm.

The estate lost over a million gallons of wine in the 1906 earthquake, closed the winery during Prohibition, had to sell grapes to another winery for several decades, and finally came back to the family brand of Gundlach-Bundschu in 1973. That’s perseverance. One of their unique offerings (at least different from what we find in the Finger Lakes) is a dry Gewürztraminer. We really liked their Zinfandel.

Michael was curious about the differences between the vines as they take on fall colors. He got his answer. 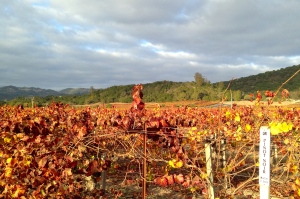 Biking is not a great way to do a wine tasting (safely) but it’s fine for a scouting mission. Michael did a big loop ride around the region and spotted another candidate for a later stop on four wheels. Ledson Winery has a gothic, Harry Potterish appearance that has earned a nickname as “California’s own little Hogwarts.” The story is that the Ledsons built it as a house, but because of its impressive appearance, it was so often mistaken as a winery, that they decided to turn it into one. How are the wines? We’ll find out… 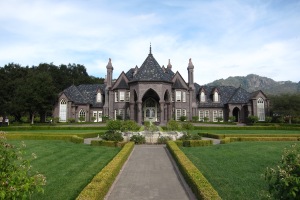 We spotted this sign here in the region: Sonoma is for wine. NAPA is for auto parts. (Get it?) There doesn’t really seem to be a snarky rivalry between the two regions, but someone just had to do the creative wordplay. How would Napa counter? Maybe a little Spanish: So-no-mas (so, no more)?

We can’t yet say that one region is better than the other. We’ll just have to keep sampling and enjoying the views. 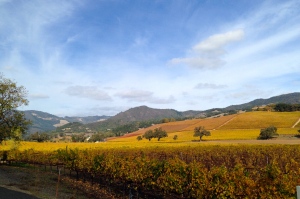 8 Responses to Sonoma – the other wine valley. Starting November 1 and still going