Near Port Orford, on the westernmost point of Oregon:

The Hughes family, Patrick and Jane, built a very large (over 3,000 square feet) Victorian home near the river in 1898.

Not your typical farm house

They raised seven kids (two others died early) and over 100 milking cows on their 2,000-acre farm.

James, the lighthouse keeper, is in the center.

A short distance from the farm is the Cape Blanco Lighthouse, where one Hughes son, James, was one of the lightkeepers. On this particular coastline, the job was critical since ships could easily go aground on sand or rocks hiding less than 20 feet from the surface up to two miles away from the shore.

The light was built in 1870 using bricks made locally, with the highest quality at the base, most critical for the integrity of the building’s structure. The point is sandy, so the lighthouse is anchored on a very thick and deep slab of concrete to withstand some shifting. That seems to have been a good plan, since the structure is still sound today. 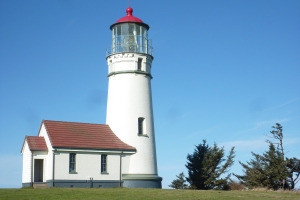 Still standing after all these years

Not enough of the local bricks were good enough, so others were brought from San Francisco by sea. However, a storm pushed the ship onto the treacherous rocks, losing some of the cargo…and demonstrating the importance of having a lighthouse to keep other boats away from these rocks!

The brick and steel of the circular staircase are the original installation from 1870.

At the top of the spiral stairs is the light. James Hughes and two other attendants took shifts around the clock in the upper level tending the lighthouse. In the early days, the light was powered by hog fat (lard) and the lightkeepers needed to clean the soot from the glass every hour.

Jack, a volunteer, shows the replica storage cans for “hog fat” and the carrying cans brought to the top of the light.

By 1936, the lens was an electric revolving lens, still in operation nearly 80 years later.

This motor hasn’t stopped since it was installed in 1957.

Today the lens needs cleaning, but not hourly. More like every couple months.

This relatively small bulb is all that is needed for the light to be seen from 23 miles away.

Bob takes his volunteer job giving tours seriously. He purchased a replica of James Hughes’ uniform and climbs the 63 steps multiple times a day on a knee he had replaced 25 years ago. Although he also has acrophobia (fear of heights), he loves sharing the lighthouse stories with visitors. 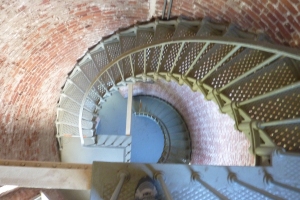 Two days earlier while we were battling wind and rain a bit north, the volunteers closed the lighthouse for tours because of the windy conditions. Winds have been measured here at 100 mph, but the lighthouse stands tall and sturdy year after year.

The last tour of the season is the end of this week. It was one more serendipitous moment of making a very interesting visit “just in time” before things close.

Our thanks to Jack, Bob, Roald, and the other volunteers for their kind service.