I cringe to write “donut” rather than doughnut, but I’ll make allowance for the world’s best. They’re from Granny’s Gourmet Donuts in Bozeman Montana, just off the campus of Montana State University. 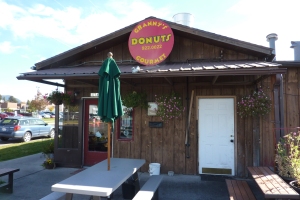 The doughnuts are squarish-round without holes, lighter than air, with a light glaze and then a filling on the top. Maybe more like grazed craters with a topping.

The owner makes his customers’ favorite flavors and then dreams up new ones on a regular basis. Today’s flavor was mocha, very, very delicious, but not nearly as wild as past offerings of Robin’s Nest or Broccoli Cream.

Robert McWilliams is the owner and donut artist. Having worked in food services for decades, he started learning about donuts and established the shop 11 years ago.

Robert and his assistant Tom both wear berets and aprons. The shop is decorated with aprons sent from people around the world. In front of the cash register, the counter overflows with large piles of foreign coins, a small stash of foreign bills, and origami dollars, all donated by customers to enhance the decor.

Robert (the owner) and Tom, the bereted duo

We wondered why Robert made this unusual pose. Up to two thousand times a day he uses his right hand to lift tongs to pick up a donut and then drops it into a bag held with his left hand. Muscle memory?

The shop has been in operation for 11 years and is #1 on TripAdvisor’s list of restaurants for Bozeman. We happened to see it while driving past MSU on our way out of Bozeman and had to stop. Glad we did!

When I asked Robert what he did before doughnuts, he said he had a business with his brother making inflatable sheep…and selling 400,000 a year. Was he kidding? I guess not. Billy McWilliams of Erotique applied for a trademark for “Luv Ewe” in 1989. Not sure about the 400,000, however.

As interesting as an inflatable sheep sounds, I’d rather have the donut.