Sonoma is open for business!

We had a lovely weekend in Sonoma October 7 and 8. The sun was shining and the temperature was in the mid-80s. We walked a couple miles to get to Sonoma Plaza, just as peaceful as we remembered it from our visit in autumn 2014. We had the 15-minute bloody Mary at Murphy’s Irish Pub and got prune danishes at the Basque Boulangerie. Michael rode his bike up Cavedale Road into the hills above Sonoma and then down Trinity Road into Glen Ellen, which was celebrating the Harvest Festival on that beautiful Sunday morning. We relaxed in a hot tub. It was a perfect weekend.

On the way home to the Sierra Nevada mountains mid-afternoon Sunday we saw ugly black smoke ahead. We passed fairly close and saw a relatively small fire near the Napa County Airport. But the odd thing was that the smoke wasn’t rising; it was being swept along almost parallel to the ground. The normally dry autumn conditions in this part of California mean any grassland can ignite if the wind carries sparks. This was a strong wind, meaning high fire danger, but it looked like the local fire department was getting it under control. In fact, we saw that this fire destroyed two homes as it spread to 20 acres. A half-dozen fire crews were called in and helicopters dropped water, getting the blaze out relatively quickly despite the strong winds. Little did they know the work they had ahead of them for the next two weeks.

Our car was buffeted on the highway as we continued our drive to Tahoe. That night the winds in the Sonoma/Napa region picked up. Somehow (and the cause is not yet known with certainty) multiple fires broke out. They had names of Tubbs, Nuns, Atlas, Norrbom, Partrick, and Pressley. Eventually 17 separate fires were identified but several grew and combined, becoming massive walls of flame and smoke. Truly brave firefighters, police, business owners, homeowners and other volunteers helped to evacuate the area and valiantly fight the fires.

During the early days of the conflagration, the “perfect storm” of wind, fire, and dry conditions engulfed a part of the town of Santa Rosa north of Sonoma, hitting the neighborhood of Coffey Park especially badly and burning home after home to the ground. Some people had mere minutes between becoming aware of the danger and having to evacuate. Sadly too many people did not escape the fires. As I write this, 42 fire-related deaths have been reported. More than 8,000 homes or buildings have been destroyed. Over 245,000 acres were impacted by the fires. By comparison, California’s worst reported fire prior to this was in Oakland Hills in 1991, killing 25 people, destroying 2,900 homes and burning 1,600 acres, with an economic impact of $1.5 billion. This year’s fires are expected to result in $4 billion in losses.

We watched all this happening from afar, safely but sadly. We kept clicking refresh on four different fire maps showing evacuation areas and places at risk or already engulfed. 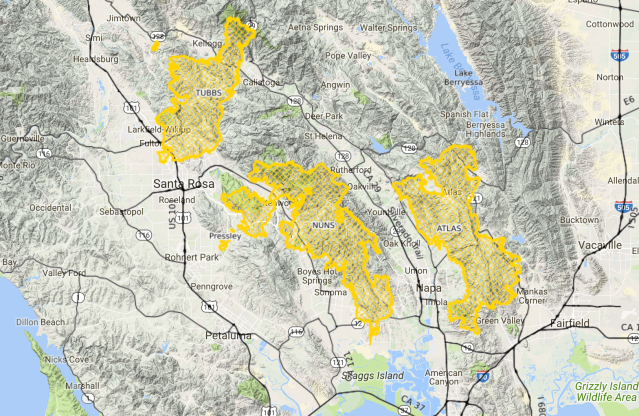 At one point this map was so covered in red (fires) that the community names were not even visible.

We latched onto the #sonomafires twitter feed and saw individuals in Sonoma reporting where they were seeing smoke and flames. Sarah Stierch, normally a wine and tourism reporter living in downtown Sonoma, stepped into action pulling together timely information on what was happening and where people could get help. At one point Michael said, “If she evacuates, things are bad.” Two hours later she left town, but kept up her communications while in exile.

For more than a week, most of the fires raged on, with crews from across the country—and Australia!—battling the flames. They used bulldozers to clear grassy stretches down to bare ground. They created backfires when the wind cooperated with them. They dropped fire retardant and water from helicopters and a 747 supertanker. They used axes, hoses, hydrants and their gloved hands to battle for every square inch.

Miraculously they drove back most of the fires threatening residences and businesses by Tuesday or Wednesday, 10 days after the start of the fire. Finally on Thursday, October 19, rain came. Northern Californians have never been more happy to see rain. The rain helped the embattled firefighters to bring the fires to an end. It took some of the deadly smoke out of the air. It brought back hope and cheer to the communities.

Throughout these deadly circumstances, the people in Sonoma and the rest of the regions impacted have demonstrated the true community spirit that makes America great. Neighbors helped neighbors fight fires in one spot. In other spots, restaurants, even some so close to the heat of the fire zones that they had lost power, served first responders and those who had lost homes. All of North Bay and beyond has gathered goods and money to help those hurt by the fires. 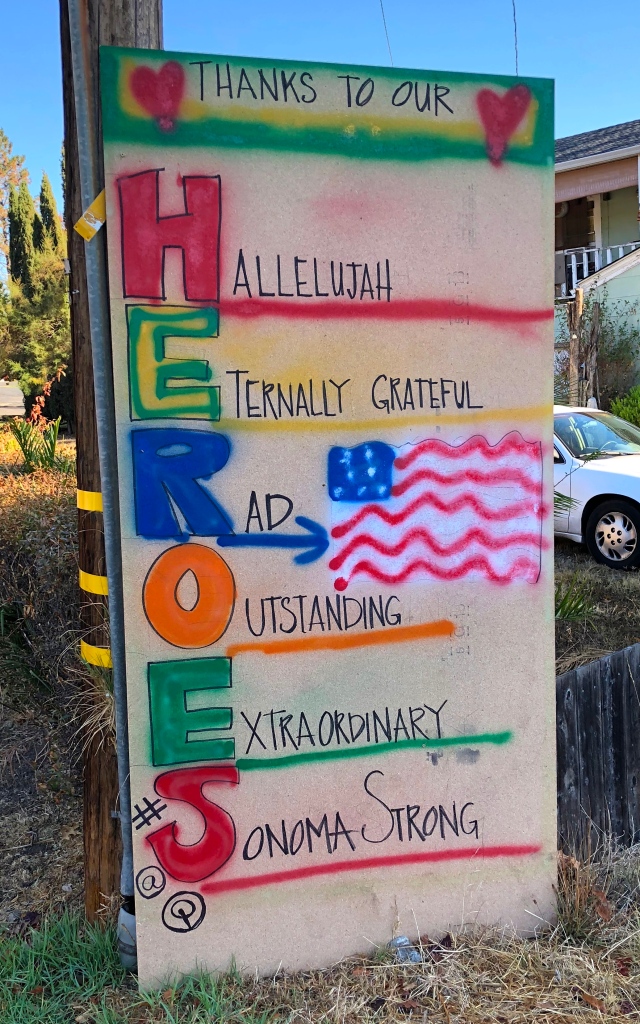 While those who have lost loved ones and homes can never replace their losses, the fires are nearly out and recovery has begun. The community is not a few handfuls of wealthy vineyard owners. It’s not a privileged rich community of Silicon Valley retirees. Sonoma thrives from the hard work of farmers and vintners, small business owners and employees, chefs and waitstaff, gardeners, hospital workers, store clerks, firefighters, and other everyday people. Sonoma was and is a region that depends on wine and tourism.

The weekend of October 21 and 22, we returned to Sonoma. We were worried that there would be little to return to. In contrast, we saw that Sonoma is opening for business. #Sonomastrong is everywhere. First and foremost is the appreciation for the lifesaving efforts of all those who helped during the worst imaginable ordeal a community could face. 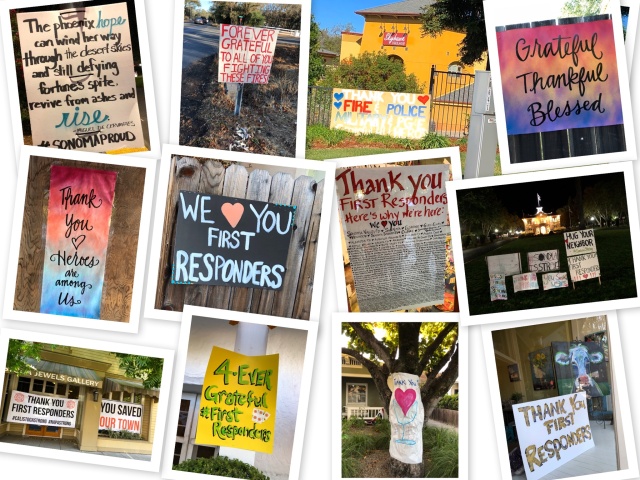 Literally every storefront had some sign thanking first responders and volunteers for their efforts during and after the fires.

Next is the spirit of renewal. Some restaurants and wineries that had closed for mandatory or cautionary evacuation but escaped the fires completely were already open. Others were cleaning up after partial damage, taking stock, and getting things back to normal over the next several weeks. Some will take more effort to rebuild, replant, and renew. Mercury News provided an early list of wineries most impacted. Day by day, some damaged wineries were reporting their plans for reopening, anxious to get back in business again.

Buena Vista Winery, established in 1857, and California’s oldest winery, escaped the bulk of the flames and is opening this week. We expect that the interpretive history trail that we saw on our last trip might have suffered some damage. Next to Buena Vista, Bartholomew Park Winery was initially reported as destroyed, but that was an incorrect early report. They expect to open soon as well. Gundlach Bunschu lost their family home, but opened the winery for tastings by October 19.

Farms and other businesses were also affected. In fact, marijuana farmers were not as far along in their harvest as were vineyard owners, so many saw their earnings for the year go up in smoke. 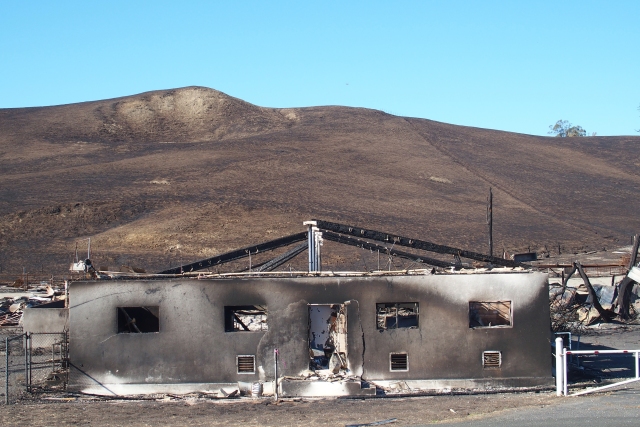 The 100-year-old Stornetta Dairy buildings were no longer in use, so little effort was made to protect them.

Some homes along Route 12 remained standing while neighboring homes burned to the ground. 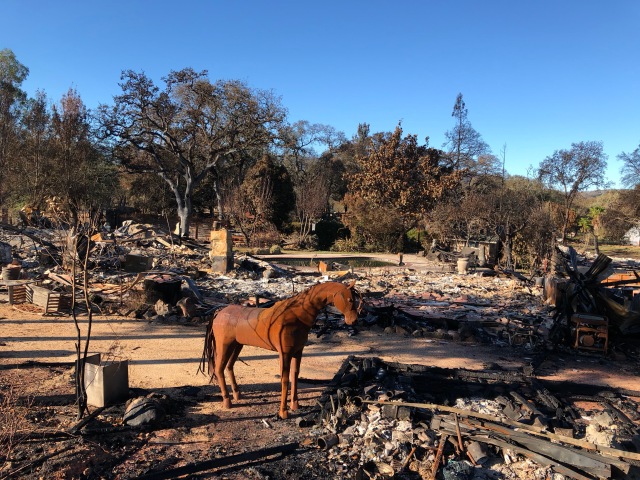 This was a beautiful home on route 12 north of Sonoma. All that is recognizable now is the rusted metal horse, still standing.

Three years ago Kathy encouraged us to visit Ledson Winery, which looks like an old castle, but started as a family home. 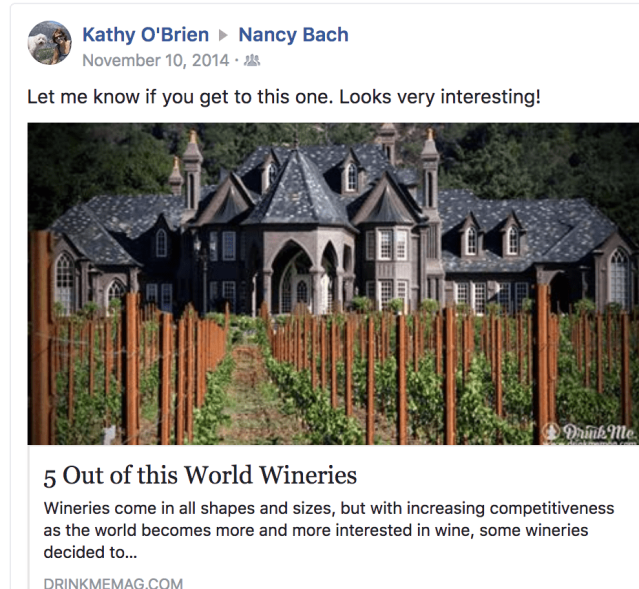 This was in the area where Michael went biking on the day before the fires started. When we heard about fire stretching north of Glen Ellen on both sides of Route 12 we worried this winery would not make it. Thankfully it did survive, after harrowing days and nights of fire. 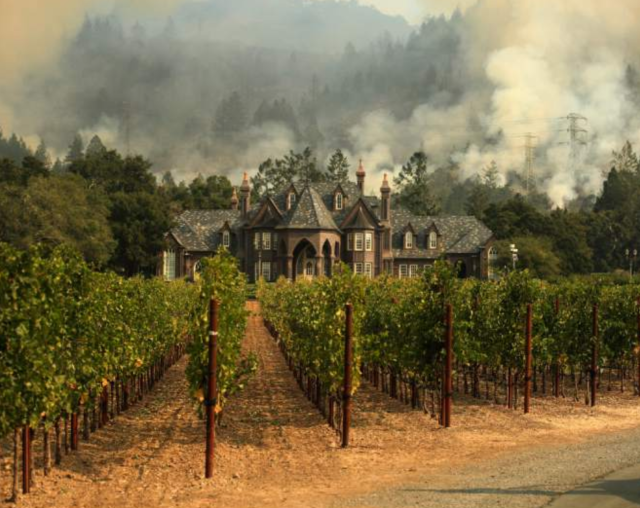 Photo by Jae C. Hong. We couldn’t get close enough. Photo by Karl Mondon. We definitely weren’t close enough for this.

Napa was also impacted of course. Signorello Estate was destroyed. Google Maps labels it as “permanently destroyed,” but the owner has plans to rebuild. Three years ago we rode our bikes along the Silverado Wine Route, with winery after winery. We loved the wines of Stag’s Leap Wine Cellars so much that we got a membership. News reports of damage to the winery were exaggerated and they reopened for tastings nine days after the fire started.  Hall Wines, with the giant silver bunny next to the highway, large art gallery, and great wines, was not affected, but set up a matching funds donation to help Napa neighbors. The community came together: #NapaValleySpirit

To the north, Triple S Ranch in Calistoga, where our niece is getting married in June, survived because of the amazing efforts by the owner and staff, fighting the fire, with the backup plan to seek sanctuary in the swimming pool if they could no longer fight or flee.

Some areas of hillside are totally blackened while adjacent vineyards appear unscathed, with a clear line of demarcation between burnt grass and vineyard. We heard from one local wine expert that the moisture in the vineyards made them resistant to fire. 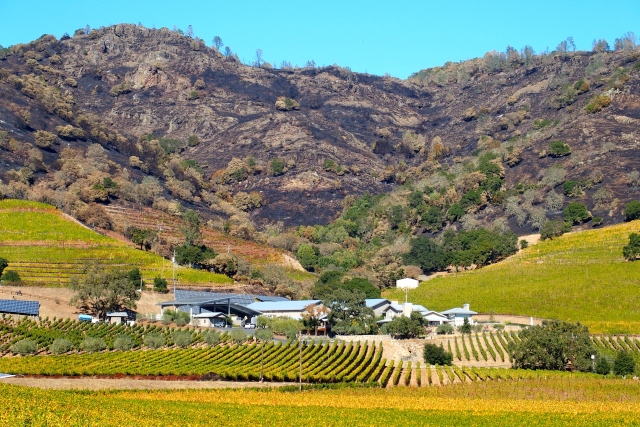 Imagine feeling the dread as fires covered the hillside behind your home and business, and the relief when the smoke finally cleared and most of the productive property was unscathed.

By October 27, the fires were proclaimed as more than 90% contained. By Halloween, the fires were over, after 20 of the most frightening days Sonoma residents have ever experienced.

Today Sonoma is open for business. Besides, giving monetary donations, the best way to help the region is to visit the local businesses and wineries or buy Sonoma wines wherever you are! 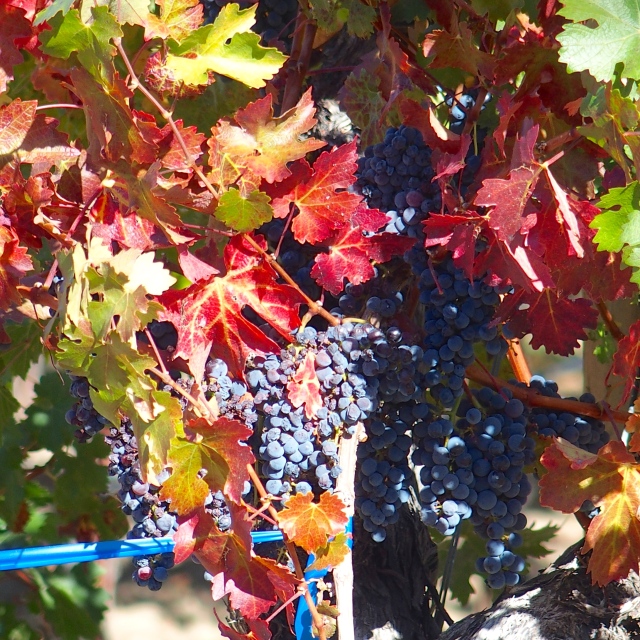 The path to Sonoma’s recovery is underway. As Louis Pasteur says, “Wine is the most healthful and most hygienic of beverages.” Let the healing (and the drinking) begin.

This entry was posted in Smell the Roses, Travel Journal and tagged Sonoma, wildfire, wine, wineries. Bookmark the permalink.

1 Response to Sonoma is open for business!