A man a plan a canal Panama (and a hat)

Posted on September 9, 2016 by noconbach

Our location at a Hyatt Place in Panama was easy to find. All we had to do was tell the taxi driver “Iglesia del Carmen” and he (or she) would bring us to this beautiful gothic church around the corner from our hotel. Like many of the other churches we visited in South and Central America, it had special activities for the Jubileo de la Misericordia, Jubilee of Mercy. This diocese celebrated 500 years of faith in 2013.

Church of Our Lady of Carmen

Illuminated at night, it looked like a Disney fairy-tale castle as much as it did a church. 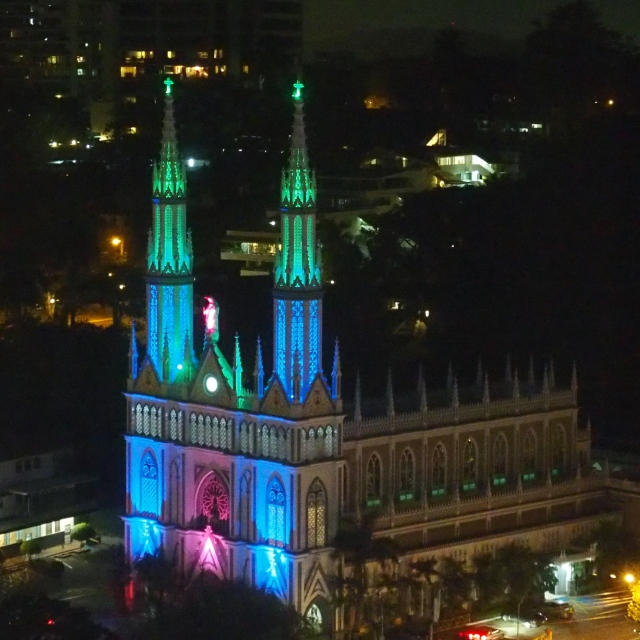 Panama is famous for at least two things: panama hats and the Panama Canal. Michael traded in the Made-in-China panama hat that he bought in Buenos Aires for a legit white panama hat handmade in Panama.

Michael in his infinitely foldable Panama hat in front of the iconic Panama Canal.

With hat in hand, the place to be in Panama City is the canal, truly a logistical marvel. Without the canal, these container boats with precious cargo would risk the treacherous Drake Passage and long timeline to travel around South America’s Cape Horn. Alternatively, rail and truck traffic across the U.S. would be much higher.

This might look like a stack of Legos, but it’s actually a giant ship full of railroad-car-sized containers.

Viewing canal crossings is a big deal. The Miraflores Visitor Center is equipped with four floors with stands, ongoing live descriptions in English and Spanish, and plenty of ice cream to withstand the heat. Construction of the canal was started by the French in 1880 but didn’t get far. That effort went bankrupt and the designers, including Gustave Eiffel of the Eiffel Tower, were indicted. President Teddy Roosevelt stepped in with support of Panamanian independence with strong economic interest of achieving this quick and inexpensive route between Atlantic and Pacific Oceans. The canal was completed in 1914 and more than 25,000 workers died in the two construction efforts, mostly from mosquito-borne disease. More than 1,000,000 vessels passed through by 2010. 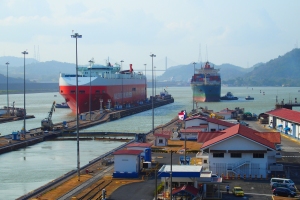 Note that the canal actually has two parallel sets of locks so two large boats can pass through at the same time, but only in the same direction.

The dimensions of the canal explain the shape of large oceangoing ships. In 1914, the first large oceangoing diesel ship, the Selandia, was 53 feet wide. The canal was built 110 feet wide. Engineers probably believed they had plenty of safety margin, but they didn’t envision the size of modern watercraft. While pleasure boats generally have rounded hulls, modern container ships and cruise ships have straight up and down sides. This is specifically to enable the largest possible dimensions that will pass through the canal with a small safety margin, the Panamax limits. An oil carrier 106 feet wide has squeezed through. 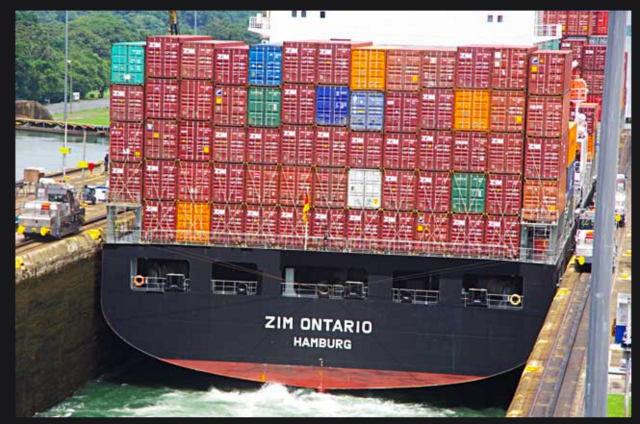 Like trying to put size 4 jeans on a size 14 body. Is there really a chance they will fit? (photo from the Panama Canal History Museum)

Ships are picked up by small guide boats in the manmade lake that holds rainwater to serve the lock chambers. We couldn’t see this process from the viewing platform, but it consists of throwing a lead rope between the two vessels and engaging a towline. Then a Panamanian pilot boards the large vessel, hoisting the Panamanian flag, and steers the vessel through the canal. Like the mules along the old Barge Canal in New York, small vehicles travel beside the canal pulling the ships forward through sections of locks. 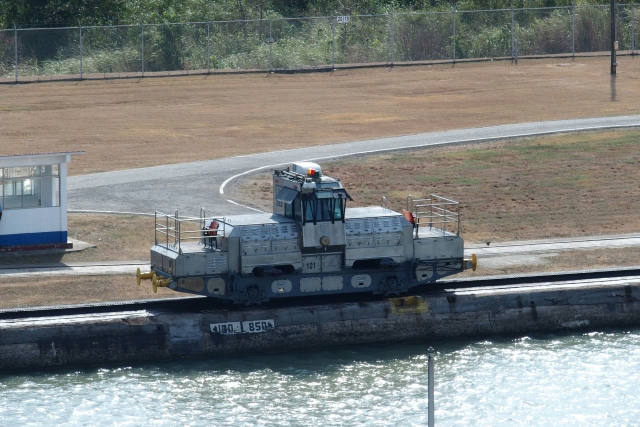 A modern-day mule. This vehicle has a bit of a roller-coaster ride up or down as it travels on the track beside the two sections of the lock.

Like so many other things in the world, the canal has been pressured to be “super sized.” The existing Panamax constraints on maximum boat dimensions no longer work. Wishes for a new, bigger canal began in 1939. Construction of a new canal just beyond the existing one finally began in 2007. Our announcer speculated that it might open as early as July 2016 but final agreements have been slow to be completed. This new canal will operate in parallel to the existing one, but it will be 180 feet wide and long enough to allow two boats to enter the single lock simultaneously. 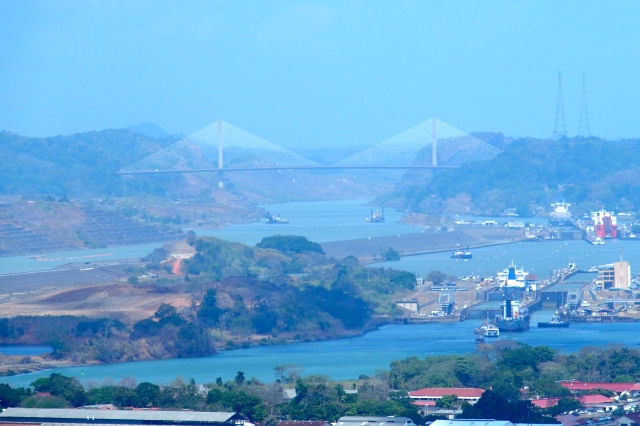 The basin for the new canal is above the existing canal in this photo.

As we write this in September, the new canal has been open since June, 2016, notwithstanding some problems. At least three ships have had some damage, hitting fenders of the locks.

Interestingly, Panama City is not an enclave for Americans. If Panama has 25,000 American residents, they’re not here. The beaches northeast of the city and on the Pacific Ocean are popular retirement spots. Most of our taxi drivers in the city spoke only limited English, but seemed to enjoy engaging with tourists and patiently tried to understand our Spanish. One particularly helpful driver took us on a side trip to see a small section of Panama near the canal. Here he said all the wealthy expats lived. He showed us the cemetery where American servicemen from the Spanish American War through to the building of the Panama Canal are buried. 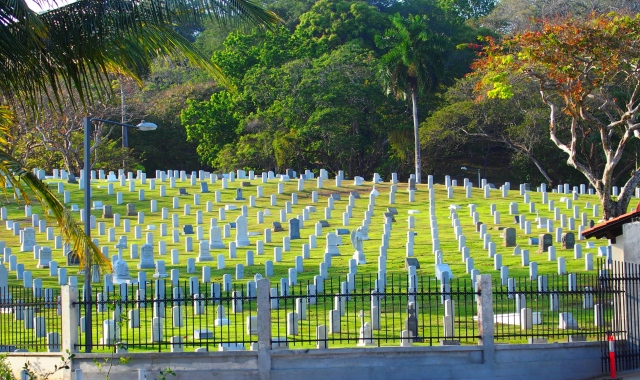 Donald Trump has made a name for himself in Panama. His Trump Ocean Club is a residential property that bears his name but has had only a management company connection to the Donald. Recently residents sued the Trump management company for improperly paying themselves large amounts of money. Trump has countersued for millions for damage to the Trump name. Based on happenings in American politics, he doesn’t seem to have suffered much. We ate here…meh. 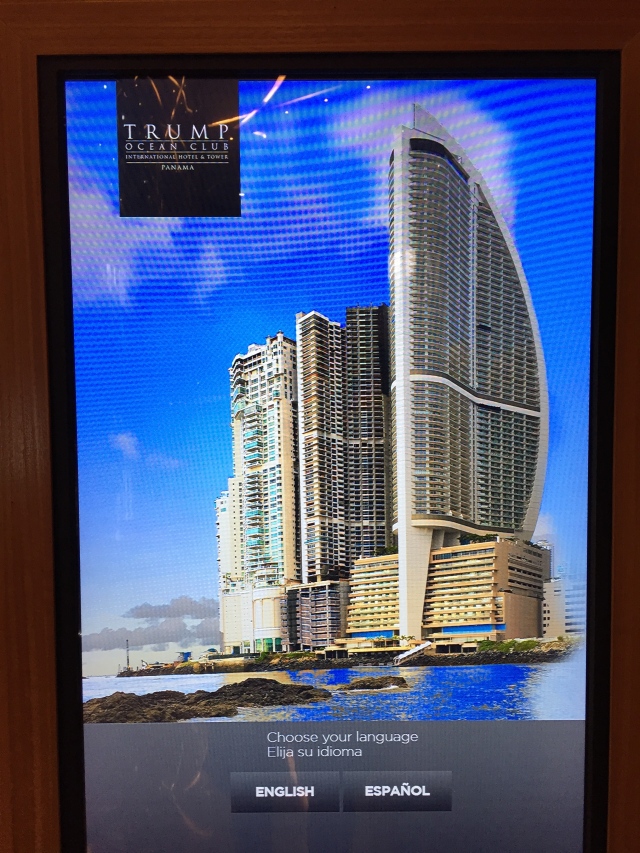 Another monument to Trump that has left locals in a bind.

There isn’t a natural segue from the Donald to our next Panama experience unless it is by contrast. Donald Trump is a loud, larger-than-life character with a huge presence. This sloth was so quiet and small we would have missed it if we hadn’t noticed others gazing up in a tree. Maybe there a couple similarities between the sloth and the Donald. They both have small hands and odd hair.

The sloth or the Donald?

The two things Panama is known for became three after our visit. The country made it big in the news with the publication of the Panama Papers revealing big names in world politics who have very large and questionable offshore accounts in Panama and elsewhere. Mossack and Fonseca had a big legal firm at the heart of the fray and just a few blocks from our hotel. Let it be known that we did not go to Panama to visit our investments. The only Panama papers we associated with were Spanish-language newspapers announcing the goings-on of the American presidential campaign.

Near our hotel, the F&F Tower, right across the street from Mossack Fonseca.

Note: Our Panama trip was in March. We took the slow route around South America to bring this to publication.

This entry was posted in Travel Journal. Bookmark the permalink.