Crossing the Andes, then and now

The distance from Mendoza Argentina to Santiago Chile is only 111 miles “as the crow flies.” But not many crows could follow the flight path over the high Andes. For us, making this crossing by car was relatively easy, though it’s been calamitous for other groups in the past. The drive starts along the Rio Mendoza and follows several of its tributaries. 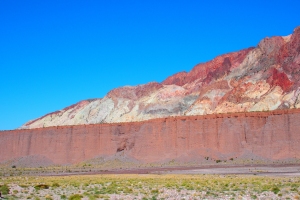 These cliffs along the river look almost like the glacier fronts we saw in Patagonia, only red rock instead of blue ice.

With the exception of one section of water, all the rivers we saw were dark and thick with silt. With enough time, this constant erosion will wear the mountains down to nothing. Much of this silt collects in a pretty blue lake formed by the Portrerillos Dam, so much so that the reservoir has lost about a third of its capacity since it was completed in 2003.

Clear waters run down the mountains, but the river is dark and thick as boiling milk chocolate pudding.

This part of the Andes was formed by tectonic shifts when the land mass of Pangaea broke up more than 200 million years ago. Those initial events and subsequent changes have left fascinating examples of varying geology.

Mountains are barren, but the valley shows some vegetation.

We almost didn’t get to drive through the mountains. Route 7 which originates in Buenos Aires suffered a bridge washout southwest of Mendoza a few weeks before we arrived. 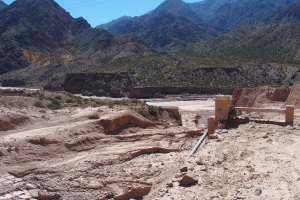 Where is the bridge? 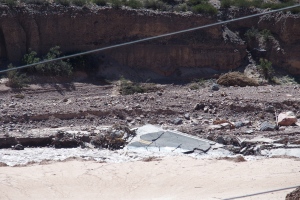 Pieces of the bridge pavement are in the river.

Fortunately a temporary bridge was in place that was sturdy enough for the heavy cargo-laden semis crossing the Andes. Route 7 is the main passageway for commercial travel between Chile and Argentina in this part of the Andes.

We saw (and drove behind) many trucks slowly climbing the hilly road.

At low elevation, the landscape is a red and arid sight.

From a distance these looked like giant sand dunes.

Appearing markedly different from the giant red mountains is Puenta del Inca, a rock formation creating a natural bridge over the Cuevas River. Long before the Spanish arrived in South America, the Incas used this bridge for their crossing through the Andes. In the 1920s a spa hotel was built here to take advantage of the health benefits from the mineral waters.

As we drove along this route we saw occasional piles of plastic bottles. Many looked like simple littering or even collections for recycling. Not far from the Puenta del Inca we saw a huge pile of plastic bottles, far too many to be unintended. We learned that this represented a shrine similar to the red clothing shrines for Gauchito Gil. In this case, these plastic bottles are full of water for Difunta Correa. She was a young mother who followed her soldier husband and brought her infant child. Unfortunately, she died during her travels, but her baby was found still nursing miraculously from her dead body.

The beginning of the trek to Aconcagua.

Mount Aconcagua peeks out through the pass behind this cross.

Aconcagua is 22,838 feet tall. It’s such a well-known mountain that North Face has a jacket perfect for climbing it, named, appropriately, the Aconcagua. We walked just a couple miles in the park on an interpretive trail.

Our view looking south. The distant green rocks may have some copper in them.

Near Laguna de Horcones high in the mountains were ammonite fossil shells, remnants of the time this area was below the ocean.

Another cross appears at the summit of Aconcagua. We didn’t make it that far to take a photo. Even without making a challenging climb, the trails toward the summit are very tempting for long hikes.

Aconcagua looms north of our passage. In the distant past, parts of the glacier  visible in the photo have broken off and hurled snow and rocks down the mountain valley to spots this far away.

Our crossing of the cordillera from Mendoza to Santiago took about 5 hours for travel (plus some time for border crossing, photos, and road repairs.) More than 200 years ago, José de San Martín crossed the Andes in 21 days. He led Argentinean and Chilean troops to roust the Spanish from this part of the continent. He started with about 4,000 troops and lost about a third on the passage. (We did not lose either of our troops.)

Statues to San Martin are all over Argentina and Chile. He is a hero in both countries.

Another Andean crossing in this area was unplanned and had an even greater percentage of losses. A 1972 flight carrying a Uruguayan rugby team among the 45 people on board crashed into the mountains south of Mendoza. After more than 2 months in the cold and without food, 16 people were eventually rescued.  Nando Parrado wrote about the ordeal in Miracle in the Andes, including the 10-day climb he and Roberto Canessa made over numerous peaks of the cordillera to reach safety and arrange rescue for the others. We read this book before making a very easy crossing and were amazed at the strength and perseverance of these survivors under harsh winter conditions.

People magazine just published a story in advance of Canessa’s publishing of his own book, I Had to Survive. Both books provide quite a bit of information about the acts and the angst related to cannibalism of their fellow passengers that kept the survivors from dying. Interestingly, this is the People meta tag: http://www.people.com/article/andes-flight-disaster-survivor-cannibalism-book. Note the emphasis on cannibalism. It sounds a lot like the Donner party.

In the late 1800s, the narrow-gauge Transandine Railway ran from Mendoza Argentina high into the Andes. By 1910 work was completed to connect through the Uspallata Pass to Santa Rosa de Los Andes in Chile. It operated tenuously until 1984.

Imagine a train running beside the roadway on this bridge over the Rio Poncones. Most bridges are still in good shape. 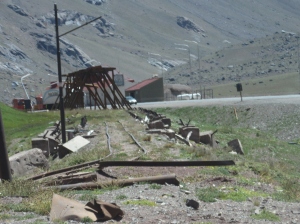 Much of the tracks, however, are not in good shape, ripped apart or covered by avalanche debris.

The highest sections of the tracks were only about 3 feet in width.

Some railroad sections are covered by avalanche debris. Many protective sheds are in ruins.

In addition to its cargo function, the train served as an unofficial ski lift. As the pass through the mountains was under construction, engineers used skis to get around the work areas. A Nordic Pony Express-style mail service operated for a short time to get mail across the tops of the peaks. By 1910, recreational skiers took the train to the top and skied down the slopes. This led to the creation of the Portillo Ski area. In the early days Chilean Mountain troops groomed the slopes by packing snow with their boots.

Laguna del Inca’s blue-green waters come not from glacial particulate, but from the spirit of an ancient Incan princess (according to legend).

By 1966, the resort had such renown that it held the Alpine World Ski Championship that year. A young Jean-Claude Killy won two golds. Today the US Ski Team and others practice at Ski Portillo in July and August when the Colorado mountains are full of summer wildflowers. Seeing the area now with nothing but rocks, it’s hard to imagine snow-covered ski slopes.

A chairlift travels over one of many turns on the road down the Chilean descent.

Once over the pass, the Chilean road winds down 29 turns. Traveling this route was bad enough now in bright sun and with dry pavement. It must be extremely treacherous with snow. In fact, the passage closes for 40 to 45 days each winter because of impassable conditions.

This is the Google Maps view of the road!

Plans have been proposed to build Bioceánico Aconcagua, a 33-mile-long rail tunnel through the Andes that would allow rail transport of cargo containers as well as passenger train travel. 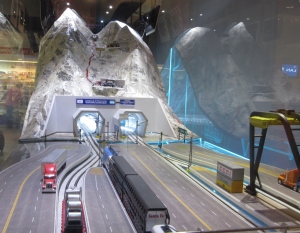 The detailed model in the airport shows the major advantages of a straight, flat border crossing without snow vs. the existing road.

Nominally, completion is scheduled for 2020; however, the biggest barriers are not necessarily the mountains themselves, but the financing and international politics. Locals told us they didn’t expect to see this happen for 10 or 20 years, if ever. 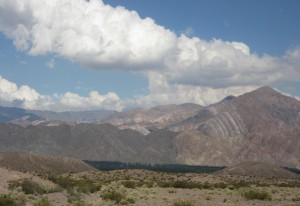