Our next Patagonia location was El Calafate. This town is the jumping off point for exploring spectacular glaciers. But first, a bit of other information. El Calafate borders Lago Argentino. Along the shore and growing wild throughout the area are calafate bushes with blue berries.

The calafate berry and its thorns

The berries taste more like plums than blueberries and they have 1/4-inch seeds. They’re used for jam and alfajore fillings, as an alternative to dulce de leche. Unlike easy-picking blueberries, these bushes have sharp thorns. 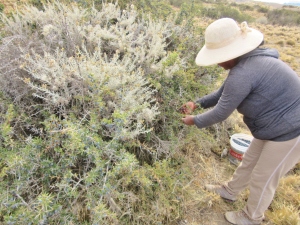 Like picking blueberries at Bedient Farm. Look how full her bucket is. She warned me about thorns.

Near the lake is a very nice park, Laguna Nimez Reserve, with an interpretive nature trail. This is where I saw an Argentinean dwarf armadillo, a pichiy. It was small (around 8 to 10 inches) and hairy. The guide here said that her boyfriend’s family eats these cute little guys. Eew! 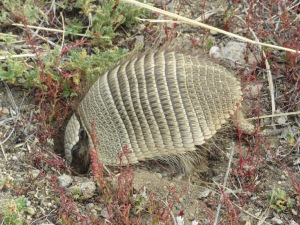 The pichiy simply scurried around poking its head in the ground, oblivious to the people around it. 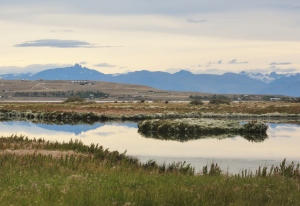 Late afternoon reflections of the mountains in Laguna Nimez Reserve.

El Calafate is also loaded with lavender at this time of year, giving the whole town a nice aroma.

Los Glaciares National Park is located here, with some of the most amazing glaciers anywhere in the world.  On the way to the park is a fascinating museum, known as the Glaciarium, that explains the history of this ice field as well as comparisons to glaciers elsewhere and warnings about global warming. 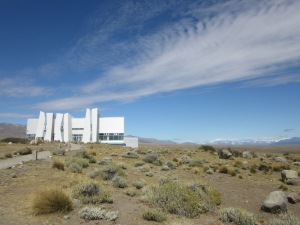 The Glaciarium rises up from the rugged, rocky land. We realized that the facade has a resemblance to Perito Moreno glacier.

Most of the glaciers we’ve seen elsewhere have been up in the mountains, melting, and displaying all the dirt that has fallen on them. Perito Moreno is not that. It’s brilliant blue, so close we could almost touch it, and expanding rather than shrinking. The most exciting part is that it ends in a river, so it doesn’t just melt but “calves,” creating ice bergs that float down the river. 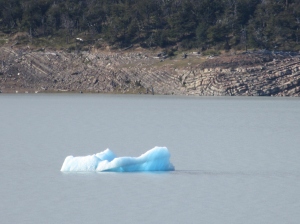 As we drove toward the glacier on an 80-degree day, we saw this blue iceberg a couple miles downstream from the glacier face.

That iceberg was enough to ooh and aah over, but as we followed the winding road we came across the glacier itself, truly spectacular. It’s named Perito Moreno after Francisco Moreno, a scientist and scholar who explored numerous areas in South America in the late 1800s. He also created the Boy Scouts of Argentina.

As the glacier comes down from the Andes, it meets a peninsula of land. When this ice is jammed far enough downstream, it blocks off the water of the Brazo Rico arm from the rest of Lago Argentino, leaving that section of lake 20 or 30 feet higher than the rest. Eventually the ice bridge at that point ruptures, allowing the Brazo Rico level to equalize again, at least temporarily. View the satellite images of Perito Moreno on Google Maps. Quite impressive.

The glacier truly does seem to be alive. It advances up to 6 feet a day, although we couldn’t detect forward movement. But we did see and hear plenty of activity. The glacier is almost 250 feet tall (above the water) at this front point and stretches back almost 20 miles. Behind the face, ice is melting and trickling down through cracks, with some chunks falling. This is invisible from the front, but still makes loud creaking noises and sometimes creates waves.

Watching and listening for more than an hour. Very peaceful.

We didn’t really want to turn our backs on the glacier and miss the next section of falling ice.

As we watched, ice fell frequently. Smaller pieces made the sounds of gunshots or fireworks. Larger pieces, some the size of a house, made giant splashes, creating large waves, and a massive spread of ice floes. It’s easy to miss the start of this because the sound is a bit delayed…and then it’s thunderous. Finally the largest chunks of ice floated back up to the surface, the “calves” that moved into the river as ice bergs.

Turn up the volume and go full screen to see for yourself in this video:

We saw another odd phenomenon as we watched and listened for falling ice. We heard a very loud noise, almost like the sound of a whale breaching, but we didn’t see any action on the face. We realized that a large iceberg in front of us had rolled over, probably from a change in center of gravity as parts of it melted. 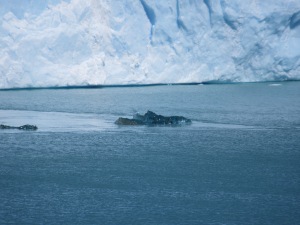 Even long after falling into the lake, this ice continues to be fascinating.

The park is extremely well done, with miles of wood-and-steel walkways offering viewpoints for thousands of people at a time without crowding. 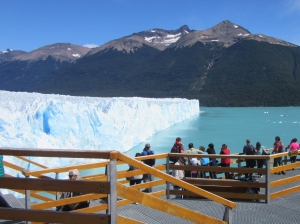 The glacier looks a little different from every vantage point. 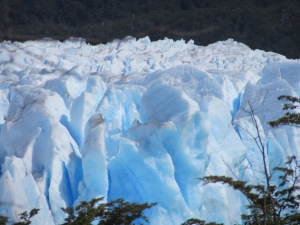 Do you see a stocking-hatted man in profile? When we returned two days later this whole section of ice had fallen away.

Less than a mile downstream of the glacier, we found access to the lake. The water seems quite warm, at least in this shallow area, probably in the 60s. Even so, the ice is slow to melt. 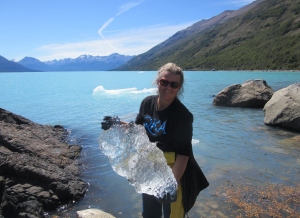 My own personal iceberg!

We’re not done with glaciers. More to see in El Chalten.

Sun setting over Lago Argentino. We head north to those mountains next.