After traveling the world for more than a year, it was great to stop and nest in northern California, Truckee to be specific. We found a home away from home in Stephen and Kathy’s Tahoe Donner house (thank you!), in a large community where many other Bay area residents come to spend summer weekends hiking and winter weekends skiing. Glorious! Given our retired status and the transitional time of year, we were able to enjoy both of these activities and much more.

View of the Sierras before the snow arrived.

The warm autumn let us get in hikes to some beautiful hikes. Five Lakes is high in the sky between Squaw and Alpine Meadows, with a 4-mile hike up about 1,000 feet in the Granite Chief Wilderness.

We walked around all five lakes. This is one of the biggest.

Five Lakes is nearly the same elevation as the tops of  Squaw and Alpine, formerly separate mountains, now part of the joint Squaw/Alpine resort but separated by a narrow strip of land. Troy Caldwell owns this land and has been trying to create his own ski resort, White Wolf Mountain.  The towers for a proposed ski lift have been under debate and construction for years, but slow negotiations have kept the project from completion.

In December of 2011, we visited Eagle Lake, overlooking the western shore of Tahoe Lake. There was almost no snow, but ice thick enough for playing hockey. 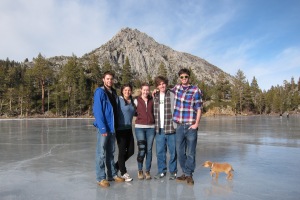 Chris, Liz, Meghan, the two Pats, and not our dog on nature’s ice rink at Eagle Lake, winter 2011

This fall we returned to Eagle Lake to see it still looking pretty but now pretty different in warm weather.

Michael’s bike rides gave him lots of views of Donner Lake, Donner Pass, and Lake Tahoe. He made the 10-mile climb up about 1,200 feet to Donner Pass.

Michael’s “selfie” from the top of Donner Pass

We also enjoyed the hiking trails inside Tahoe Donner, particularly the interpretive nature trail past a beaver dam. 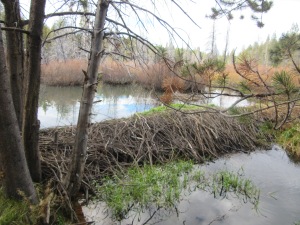 Of course, the neighbors living just behind this spot  were not all that excited about losing their trees to beavers.

They had to put their poor trees in cages to keep the beavers away.

We learned that the rather tall trees in the area, including many in S&K’s yard, are Jeffrey pines, that smell like “pineapple and vanilla.” I’ll vouch for the vanilla, actually very lovely, but still haven’t discerned any pineapple. We had never heard of this, but when the Jardims visited us, Philip (retired biology teacher) knew all about it.

Smelling the Jeffrey pine for essence of vanilla (yes) and pineapple (not really). Try it!

The Donner area is of course known for the Donner Party, 87 people who arrived at the east side of the Donner Pass in October 1846, with early snows stranding them with limited food, clothing, and shelter. Some tried to make it over the pass but the major rescue didn’t happen until February. Only 48 survived. The Donner Memorial State Park Visitor Center tells the story of this awful four months, with a few references to the cannibalism that eventually occurred.

The top of the base of the Pioneer Monument represents the 22-foot depth of the snow when the Donners were stranded here.

While the Donners (and Reeds and Breens and Murphys and others) were freezing and starving at this time of year, we were enjoying daily visits to the rec center with outdoor pool heated to 80 degrees and our choice of three hot tubs. Michael also got in half a dozen rounds of golf, with Nancy as an occasional caddy and ball finder.

The Nakoma golf course yielded 36 lost (and now found) balls on 18 holes! One hole alone had 10 just off the tee. The golfers were probably too embarrassed to look for them 🙂

We really felt like locals, participating in the Truckee River cleanup (very little river to clean, hardly any water now), taking advantage of the community flu shot drive, going to Thursday night trivia competition (and winning several free pizzas!) and getting a CSA share for the first time (unless you count growing up on a farm as Nancy did.)

We DO NOT want a repeat of Hong Kong flu (although this particular vaccine variation probably won’t prevent that strain, but better safe than sorry!) 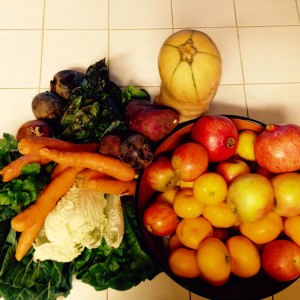 Some of our CSA bounty. What do we do with all this?

By the end of October we were starting to have hints of winter arriving. Dusting of snow in the mountains showed where the ski runs will soon be. Winds whipped up on Lake Tahoe. By the way, there is a theory about how Lake Tahoe got its name. (This may be the only place you’ll ever hear of this theory.) The Mandarin Chinese words for big and lake are da and hu. So when Asians traveled across the Alaskan land bridge, moved south to Truckee and saw this big lake, they called it DaHu. Native Americans kept the name and it was eventually anglicized as Tahoe.

Note how low the water level of Lake Tahoe is. That first step off the dock to your boat is a doozy.

Stephen and Kathy hosted the Thanksgiving for the masses in the Bay area. Truly “A lovely time was had by all.” Thank you!

As fall turned to winter, Michael salivated for skiing. In recent years, the area hasn’t had much decent snow until January. But just for us, big dumps in November, so skiing at Alpine started by Thanksgiving. In fact, Michael recouped his season ticket costs by mid-December and got in 25 days of skiing (400,000 feet of vertical) before we left in January.

By Christmas we had had several one-foot dumps of snow, a very good start to a great ski season we hope (for Stephen’s sake) and good for California’s drought conditions, as the snow will provide plenty of spring runoff. 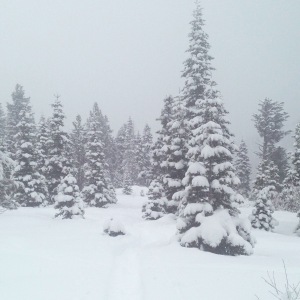 More O’Connells arrived for the year-end holidays. Kevin and Dennis from Texas. Daniel, Paul, and Claire from Maryland. Liz and Jesse (honorary O’Connell) from Virginia.

The new year started with a lovely winter wedding, welcoming Alison to the O’Connell clan. 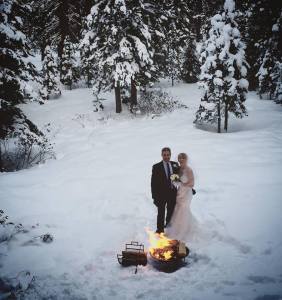 Alison said she was warmer than Tom. She had boots; he had shoes. No cold feet though for either… (photo courtesy of Meghan O’Connell)

1 Response to Our Northern California Getaway