The Italian Riviera, with pastel homes and pink meerkats

When you get to Monaco it’s a short hop, skip, and jump to Italy, so we did!*

First stop Genoa, birthplace of Christopher Columbus, home of our favorite salami, and once the site of Kodak’s European digital center.

Where would we be without this man, Cristoforo Columbo?

Nancy visited the Kodak site here in 2001. Her dad was actually stationed in Genoa shortly during World War II. His experiences in the city were quite different from ours, but quite memorable. For anyone visiting then or now, the St. Lawrence Cathedral creates a striking impression. We wondered why it had the distinctive stripes and found this research on striped churches (from Brisbane, no less) that suggests it’s similar to the “Does this striped skirt make my butt look big?” effect. The horizontal stripes make the church look larger and more impressive and authoritative. We noticed stripes on multiple other churches later in Italy and France. 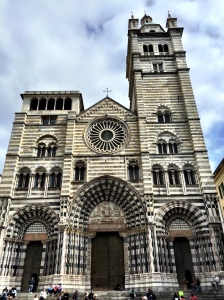 The first church on this site was built sometime prior to the 6th century. This church is from around 1100. Miraculously when a bomb landed inside during World War II, it didn’t explode. The shell has a place of honor in the church symbolizing grace and gratitude.

Piazza De Ferrari at the heart of Genoa, a major tourist and commercial center

Another major Genovese gathering spot is the Piazza della Vittoria, Victory Square. Here a triumphal arch was erected to honor the patriots of World War I (1915 to 1918 in the inscription).

South of Genoa, we stopped in Portofino. This required taking a ferry, much more fun than taking a car to this remote coastal village. Portofino is a tall, straight up and down harbor town, a “fine port.” Here we saw the first of many coastal Italian towns with colorful pastel buildings.

Arrive by boat and select from many restaurants.

Pastels also show up in other odd places. Or maybe this is more neon pink than pastel.

Pink meerkats at the Portofino Sculpture Garden. Why? We don’t know. It’s Italian.

Despite the eclectic modern art, Portofino is a traditional old town. We stopped at a spot on one side of the port and a young waiter told us his family had owned the restaurant for eight generations. Later on the other side of the port we met someone who looked a lot like him. (Do all Italians look alike to Americans?) It was his twin brother at another family restaurant. In Portofino we discovered Aperol Spritz, a distinctly Italian drink, very sweet and refreshing. It will be the drink of the summer at Keuka Lake.

Then we moved on to Cinque Terre, the five villages perched along the coast. Cinque Terre means five lands. The villages could be called Cinque Terrazos since they are all terraced up from the ocean. The first challenge was learning all five names:  Riomaggiore, Manarola, Corniglia, Vernazza, and Monterosso al Mare.  Hiking from village to village along the clifftop trails is the big draw to the region.

Our home base was in Riomaggiore (the name rolls off the tongue with a bit of Italian lilt). We stayed just inside the town gate way up the hill from the port. Cars are not really allowed in the narrow street so we walked down to the port and train station (and the long way up at the end of the day).

From the port, looking up into the village of Riomaggiore with more pastel homes.

The next town is Manarola. It should be a 15-minute walk between towns, but the famed shoreline hike, Via dell’Amore, has been closed for some time because of rockslides. (We saw workers repairing other hiking trails and can understand how difficult and time-consuming it is to make repairs on these paths. But darn it, anyway.) The train between the towns takes about a minute. A ferry runs up and down the shoreline stopping at four of the five villages.

Manarola as the sun sets, taken from the terrace restaurant of Nessun Dorma, a great spot!

We hiked from Manarola to Corniglia, climbing many stairs to the top of the cliff, walking through terraced vineyards, and then descending on a primitive path to the village.

There is a bus up from the coastal town of Manarola to the hiking level high on the cliff at Volastra, but we decided to do the stairs rather than wait an hour. LOTS of stairs!

Hiking views from Manarola to Corniglia. The vines were just starting to show buds. The trail was delightfully rugged.

The middle town of Corniglia is perched so high on the cliff that it isn’t even served by the ferry that runs along the coastline of Cinque Terre. Even so, it’s still a long walk down from the hiking trail.

After the long walk and tiring stairs, we deserved a break, right? More Aperol spritzes. 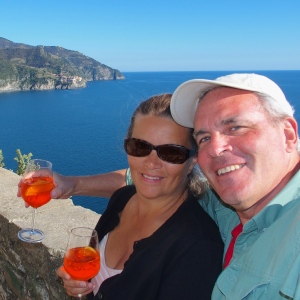 Although the full hike from Riomaggiore to Monterosso can nominally be done in about five hours, we took the ferry to the other two towns. This gave us great views from the water.

The fourth town of Vernazza is a fishing village that has the largest port of the five towns.  The story behind the different colors on the adjacent homes is that fishermen coming to port after a long day at sea want to be able to easily identify which home is theirs so they can see if their wives are busily making dinner…or making “amour” with the baker. 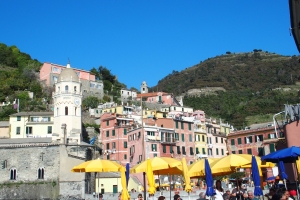 Vernazza, with the church of Santa Margherita di Antiochia

The fifth village of Cinque Terre is Monterosso al Mare. This village has both the traditional old town and a newer section complete with a modern resort with room for a beach. In the photo below, the arched roadway is actually the train tracks. The ferry arrives to the left. In the mountains behind, hiking trails come down from the heights, but there doesn’t seem to be any possibility for access by car. (There is a narrow road.)

Monterosso al Mare from the sea 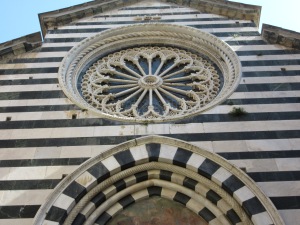 Another striped church, Church of San Giovanni Battista, in Monterosso. Note the pretty rose window too.

Returning from Cinque Terra we made one final Italian stop in Sanremo. When we drove through here in 2001 we noticed the hundreds of greenhouses. They’re still here. Sanremo is known for its extra-virgin olive oil. (Look for a special destination of origin on the label.) It’s also known as the City of Flowers and hosts an international flower market, thus explaining all the greenhouses. 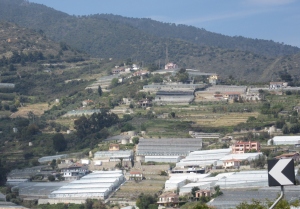 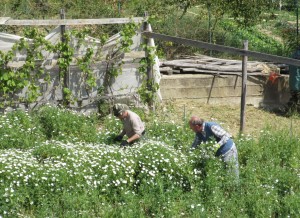 Flower harvest is underway in Sanremo

In our original ’round the world planning we didn’t expect a stop in Italy, but it turned out to be a very pleasant treat, well worth the sidetrip.

Farewell to Italy, back to the grind of travel in France! (from Manarola looking out over the Ligurian Sea)

*We took a brief hiatus with the blog, so these posts are a bit delayed and out of order. We are already back in the US but the memories are still with us.