Postcard for friends and family: “Enjoying our travels along the south of France. Wish you were here.”

Our home base is Saint-Tropez. The town has a very well-known name, especially surprising considering it has a population of just over 5,000. 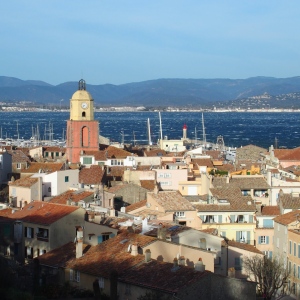 Saint-Tropez has an old town with many buildings along very tiny streets packed on a peninsula jutting into the Mediterranean.

Google Maps led us near our airbnb apartment down streets so narrow that we thought we would get wedged in place. In fact, our “street” was actually a pedestrian alley. After we were settled in, we enjoyed looking out the window to see the restaurants below doing spring cleaning to get ready for an Easter opening. The alley became an al fresco dining location. All across the town people were cleaning and painting.

Public parking for Saint-Tropez is at the end of a long pier. Michael left the car there one night and found it covered with salt the next morning. 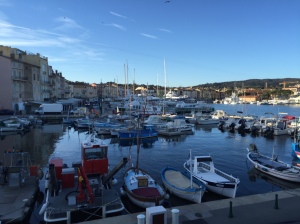 View of Saint-Tropez harbor from the near end of the pier.

Who put the salt on the car? The mistral! This strong, cold wind is a frequent occurrence in late winter and spring. The wind blows from the ocean toward the Côte D’Azur and whips up waves on the bay and saltwater into the air. 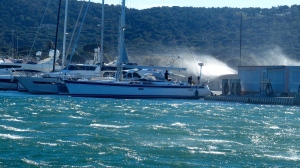 Mistral winds may be 25 to 60 miles an hour and sustained for days.

Across the Golfe de Saint-Tropez  (gulf, not golf) is the town of Sainte-Maxime, and beyond that are the mountains of the Verdon region. 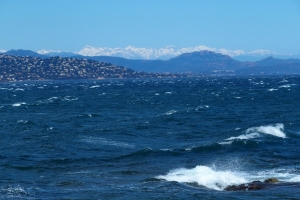 Cold wind over the waters of Saint-Tropez, and snow still on the mountains of Verdon. 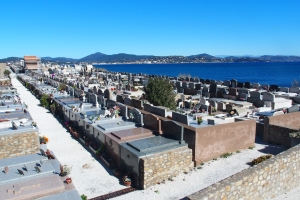 Cimetière marin de Saint-Tropez: Those no longer able to enjoy it have some of the best views from Saint-Tropez.

Although tourist season hasn’t officially started, the streets of Saint-Tropez are already crowded with both pedestrians and cars, making it even more difficult to drive in and out of the town. The solution? Use your yacht to avoid the crowds. Dakis Joannou, a Greek billionaire, owns one we saw in the harbor. Guilty is 114 feet long and painted in an outrageous contemporary art pattern inspired by military camouflage…or possibly madness. 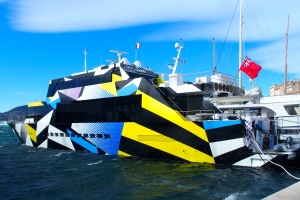 Guilty. Is it a yacht or floating art?

Those of us who don’t have yachts walk up and down the streets. In many of the shops we passed, we found images of Brigitte Bardot (or near lookalikes). In the ’50s, BB became a popular movie star. Her film “And God Created Woman” catapulted her to international fame and infamy as a sex symbol. She lived in Saint-Tropez for a number of years and has become one of the area’s favorite daughters. After she retired from film, she leveraged her celebrity to become an animal rights advocate and more recently an anti-Muslim activist. At 80, she’s still having an impact. 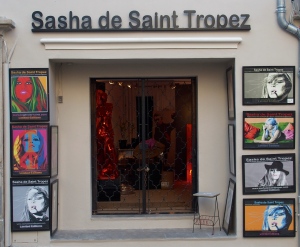 Brigitte Bardot through the ages.

The Saint-Tropez population swells dramatically when summer arrives and hordes of celebrities and tourists come to the area’s beautiful beaches to work on their Saint-Tropez tans. 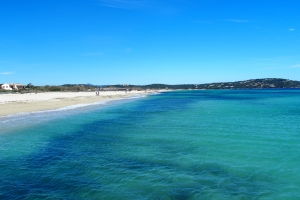 Just south of the old town of Saint-Tropez is the beautiful Baie de Pampelonne, empty now, but it will be quite a different sight in a few months.

This spot has an interesting small-world connection. “And God Made Woman” was filmed very near here. After the film became popular, the area known as Tahiti Beach became a topless beach (and eventually clothing optional). Rudi Gernreich, a popular swimsuit designer in the early years of SI Swimsuit edition, was one of the first to create topless swimwear with his monokini (basically briefs and thin suspender-like straps. beware: R-rated!). Back in the ’50s and ’60s, Gernreich’s swimwear was being manufactured by Harmon Knitwear in Marinette Wisconsin, just across the river from Menominee Michigan, Nancy’s hometown. From the wholesomeness of Midwest USA to the toplessness of Mediterranean shores. Who knew?

So when Kathy and Lynn visit us in a couple weeks, we will visit Pampelonne Beach. The ladies will be wearing brand-new blue shoes…and perhaps nothing else! Right, Kathy? Actually we will be returning to a “tres chic” spot, Le Club 55. This restaurant was created in 1955 to serve the crew working on Bardot’s movie and has grown in reputation since then. 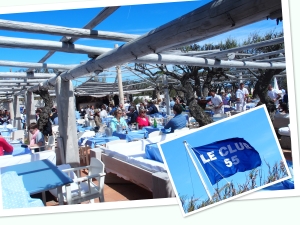 Le Club 55 is THE place to be seen on Pampelonne Beach. We have reservations! Wear blue. 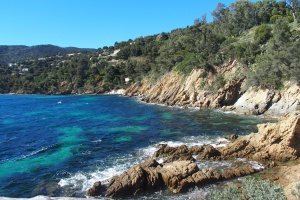 Away from the beaches, the rugged coastline is just beautiful. 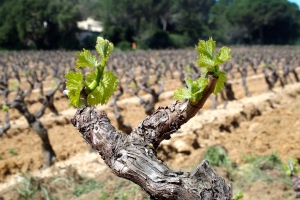 Inland, the grapevines are starting to show their first shoots. 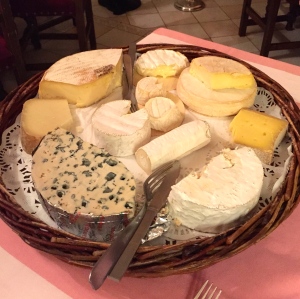 And the cheeses are always delicious. (Family style at l’Auberge de la Mole)

Next we’re leaving the coast and heading inland…to the heart of Provence.

1 Response to Touring the Côte d’Azur