This post is mostly for the kids and other family members, the 3Gs, and Cindy Hamilton and others from our Hong Kong era 🙂 Instead of photos from our current visit, we’re recycling images from our six years living in Hong Kong. Digital technology was in its infancy (having just been invented by Kodak) so image quality may not be as good as Michael’s current photos.

The very best thing about Hong Kong in 1995 was the expansion of our family to include Gilda Somes, our amah or helper, actually a third parent for the kids. We were so blessed to meet Gilda. She was with us for all six years in Hong Kong plus another in Switzerland. At one point, her sister Gina came to live with us, and then Gemma (thus, the 3Gs) before moving on to work for other expats. We miss you!

Gilda in white, Gina in pink, Gemma in red. Nancy in a Stanley Christmas sweater. Chris was usually able to reach up and touch the top of our Hong Kong Christmas trees.

Pat was only 4 when we arrived in Hong Kong, barely able to reach the counter, so Gilda towered over him at just under 5’. Imagine that (anyone towering over Pat). Pat is now 6’4”. It must have been Gilda’s excellent cooking that helped him grow so tall.

Pat, Gilda, and Gemma. Pat is 8 here and has almost caught up in height. 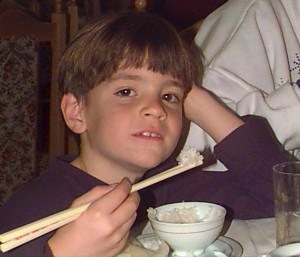 Before we moved to HK, the kids had a relocation  orientation session including lessons with chopsticks. The key is to put peanut butter on the eating ends; then you can pick up anything. (Pat here with rice; he would have preferred peanut butter.)

The streets of Hong Kong are always filled with Filipina amahs on Sundays, their day off. They cluster in parks and other public spaces with their friends and relatives. Gilda and her sisters and others from their home of Iloilo often met near the Star Ferry pier, the old pier that was close to Statue Square. The new pier is nowhere near as convenient for Sunday visits.

Hundreds of amahs were gathered around and under HSBC bank on Sunday, sharing photos, having a meal together, enjoying their limited time off. 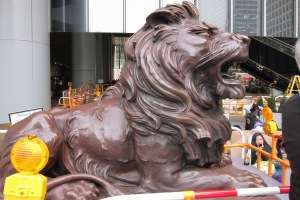 By the way, I just learned that the HSBC  lions are named Stephen and Stitt. This bit of info was from the book, “Golden Boy: Memories of a Hong Kong Childhood,” by Martin Booth. It’s set about 40 years before our kids grew up in Hong Kong, a very good read for anyone with your own Hong Kong memories.

Many of the amahs are mothers and grandmothers who have left their own children in the Philippines to come to help raise others’ children in Hong Kong. They’re able to earn much more money here than in their home country. They may see their own children only once every two years during the obligatory time off to allow a home visit. Social media has made things a bit better with the ability to communicate more easily.

Always lots going on in Central on Sundays. On this trip we passed the “Best Gorgeous Grandma” competition among a group of amahs.

There are also Indonesian amahs, many of them now wearing their Muslim headscarves. We didn’t see that often 20 years ago.

The kids’ school, HKIS, was fantastic. They had classmates from all over the world. At a party for one of Pat’s birthdays he had friends from Norway, Korea, Hong Kong, and China, no one else from the US.

Pat may have formed his love for tie-dye at HKIS. Can you find him? (in the blue and purple in the middle)

Of course, getting out of school was good too. The kids were afraid they would never have snow days. They got something even better: typhoon days.

Level 10 means a major hurricane is coming. No school. Chris is thrilled. The building did sway in the wind.

The kids at Parkview podium level in the eye of the storm. Once the bad weather was over, this tree would be propped up again by the landscaping crew.

We spent our first summer in Hong Kong in Hong Kong, not realizing that everyone goes back home when school is out. So under Gilda’s supervision and Liz’s leadership, the kids had several weeks of summer school. They had a theme each week and did activities each day. For example, for the Olympics theme, Gilda helped them make a 5-ringed cake. They puffy-painted shirts. They invented apartment Olympics: fencing with Christmas wrap tubes, equestrian events on the sofa cushions, sumo wrestling. Then we went outside for track and field. With 90-degree temperatures and 89% humidity, that didn’t last long.

Liz and Chris participated in a kids’ triathlon in the summer of 1997.

Chris played golf with Michael. Here he’s demonstrating how unusual marks get on the toilet seats. They look amazingly like marks from golf cleats. (Same thing at the hockey rink with skate marks.)

Pat was a Boy Scout. The whole family made Pinewood Derby cars.

Michael played golf…and questioned how the lady caddies could manage the clubs and the heat.

We celebrated both Chinese and US holidays in Hong Kong. Sometimes the US Navy fleet was in port at the end of the year. Instead of rushing to the bars in Wan Chai (or maybe before rushing to the bars), some of the sailors would travel in pairs to have holiday meals with local expats. We hosted many Thanksgiving and Christmas meals, with Gilda creating typical American turkey and fixings. 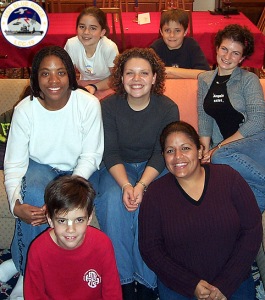 Two pairs of Navy sailors came for one Thanksgiving dinner.

Then the navy guys (and often girls) generally invited us to tour their boats. We went aboard a missile launch and a 3,000-person aircraft carrier.

This is the USS Nimitz, a very impressive “city on the sea.” Soon after it left Hong Kong it was deployed near Taiwan where the Chinese were conducting missile tests.

Chris with his own fighter jet on the Nimitz.

Liz had her own seafaring experience. As part of a school interim activity, she had several days of an Outward Bound experience on a two-masted schooner, the Ji Fung. They bathed by jumping in the ocean. Liz loved the whole thing. On the way back, the kids climbed the mast and waved as they sailed into Hong Kong Harbor.

Yes, that is Elizabeth at the top of the sail.

When she wasn’t sailing or in school, Liz was dancing.

She was “Best Dancer” with Hong Kong Island Dance School. Just after her jazz performance…

And we were never quite sure what this one was.

Shana Menton is here too.

Since we were members of the American Club, our kids were eligible to join Cotillion, where they learned ballroom dance (before Dancing with the Stars made it popular again). This is where Chris was able to wear his suit made by Tommy Wong, a good quality garment. Sean, Brien, and Reed in California put some miles on it. Now it’s waiting for the next generation O’Connell boy; he’ll be able to flip the lapel and show the Fletcher Jones label. 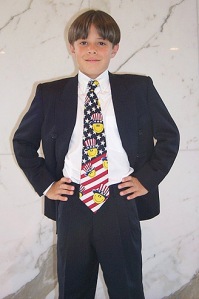 Chris ready to dance in his Tommy Wong suit. Not sure about the tie. 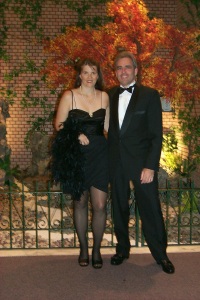 We have to show Michael in his Fletcher Jones tux too.

We were happy to have visitors to the “other side of the world.” 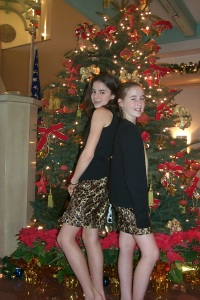 Liz and Meghan in their Fletcher Jones skirts.

Liz and Meghan in Stanley wigs and E’s dance costumes.

Even Gilda and Gina got into the wigs.

It’s always a treat to take visitors to the Peak. Here’s Marcia with Wanchai and the new convention center behind her.

Buying fake Rolexes was the thing to do when people came to Hong Kong. (This may be quite illegal.) A China-made Rolex was $20 and a better quality Hong Kong Rolex was $25 or $30. Walking along Nathan Road, “wanna buy a watch?” guys offered their wares. Just like we had a tailor, a mango lady, and a zipper guy (one section of Sham Shui Po was all fabric and accessories, with one shop just zippers), we had our fake watch guy, “Ricky,” who had a certain territory in Tsim Sha Tsui. When Vic and Karen came to visit and wanted watches, we just called Ricky (he had a business card) and he met us on the corner, then took us to his “sales room” in a nearby building under renovation. Mickey Mouse beach towels covered the unfinished ceiling and Vic (6’5”) and Karen (6’?) had to duck to get in. Ricky showed us his inventory in several photo albums. After V&K made their selection, he sent his underlings to retrieve the goods from some secret location. Everyone was quite happy until V&K wanted to pay with a credit card, not the norm for fake watch sales. Nevertheless, Ricky had an entrepreneurial spirit and wanted to make the sale. He led us through several buildings to reach someone who would process the card. Small world: It was the very legit tailor we had visited 30 minutes earlier.

Beijing was a short flight away. Here are Vic and Karen with Mao at Tian An Men Square.

Brooke spent her first Halloween in China. Coincidentally, her college roommate in Boston grew up in Hong Kong, so they have a lot in common.

Paul and Brooke at HKIS soccer field for the kids’ games. Brooke is now a freshman at Northeastern in Boston.

Even Yeti got in on the action.

No, it’s not really Yeti, but Stephen noted Yeti was feeling left out. Yeti traipses through 10-foot snow drifts in Truckee. We saw this dog dressed for the cold in Hong Kong on this trip. (It was about 70 degrees.)

We saw the Handover in 1997. At exactly midnight, the policemen changed hats. The British insignia was replaced by the bauhinia.

Hong Kong was our home. We entered a competition sponsored by the Hong Kong Tourist Association to submit an idea for the “Hong Kong Our Home” theme. Liz and Nancy delivered a PowerPoint presentation to the judging panel (while rushing around during Marcia, Kathy, Meg, and Pat’s visit). And we won! Not the grand prize, but enough for a very nice dinner out. We were the only gweilos (white people) in the finalist group. It was nice to go back “home” for a visit.

The ceremony was in Cantonese. They provided an interpreter so we would know when to go up on the stage to receive our prize.

On to New Zealand and Australia…

This entry was posted in Smell the Roses and tagged Hong Kong. Bookmark the permalink.