Christchurch, 4 years after the quake – January 2015

In September 2010 Christchurch suffered a serious earthquake, magnitude 7.1. Although New Zealand is on the hot zone of the Pacific Rim’s Ring of Fire, locals didn’t expect the quake since they simply hadn’t had any severe geothermal activity in decades. In one of the places we stayed we saw  a book about the “big one,” this earthquake which had no fatalities and relatively mild damage. 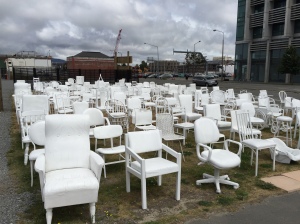 This interactive sculpture has 185 chairs, one for each person who died. 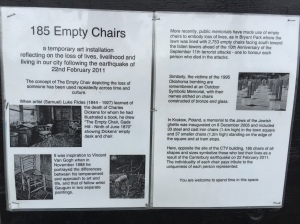 Select the chair that speaks to you about the tragedy and sit in it to reflect.

Over 80% of homes were impacted. Public buildings were damaged and unusable. The iconic symbol of the city, ChristChurch Cathedral, over 100 years old, was destroyed. 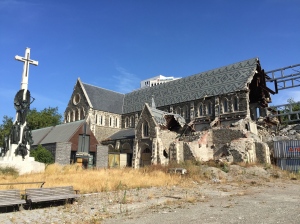 The spire collapsed. The visitor center on the left showed little damage. In November 2011 the church was deconsecrated. 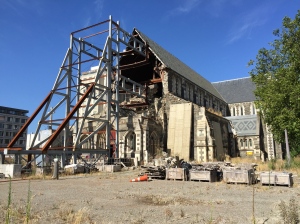 The rose window was actually destroyed in June 2011 when steel supports intended to protect it were pushed against it by another aftershock. 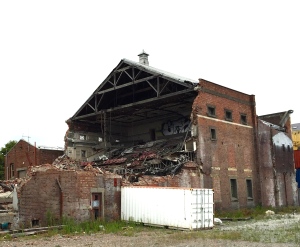 More earthquake damage. This one was a theater.

So why are we able to take these photos now? It’s been four years. Shouldn’t these buildings have been demolished or rebuilt? Financial and emotional issues are getting in the way. Insurance companies are reluctant to pay. The government wants to influence design. Funding is limited. The church is nominally planned for demolition, but the process is in limbo, with court actions to determine if total demolition is appropriate. Even UNESCO has an opinion since it is a heritage site.

There are some restarts. This “movable mall” made from shipping containers has been located and then relocated in several spots in the city’s downtown area. 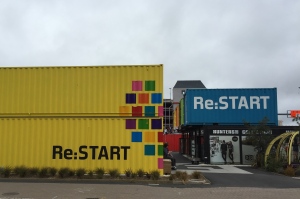 A great use for used shipping containers.

Note the cranes. Maybe the mall is on the move again.

An earthquake-resistant design was created by Japanese architect Shigeru Ban for a replacement cathedral. It’s made from cardboard tubes. It’s even called Christchurch Cardboard Cathedral on Google Maps. 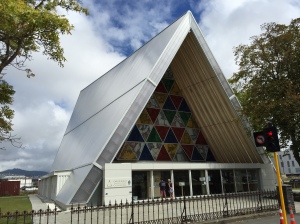 Open for spiritual business in August 2013 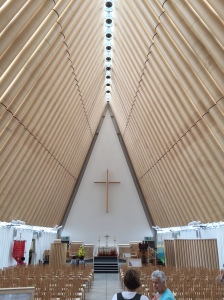 The “beams” are hollow cardboard tubes. Even the altar and choir stand are tubes, just smaller.

Photos of the stained glass from the original cathedral’s rose window were used to create enlargements to give the new site a churchy feel. Volunteers at the cardboard cathedral have different views on the original, iconic cathedral. Some still hope and pray that it will be restored. Others are ready to move on and simply embrace cardboard as the new reality. 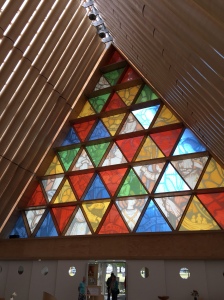 Thanks to digital photography, images from the rose window have been reproduced here. The site is now also used for non-religious receptions and music performances.

One building that has been restored is Christchurch Hospital. It suffered significant damage in 2011 and was reopened for business by 2014. It has the busiest emergency department in New Zealand. And we helped! Nancy had to make a two-day visit for a pretty serious emergency. Thankfully, the building is intact and the staff are fantastic. 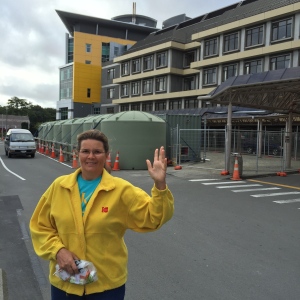 My home away from home in new Zealand, Christchurch Hospital.

2 Responses to Christchurch, 4 years after the quake – January 2015