We didn’t rent a car in Hong Kong. The city is very walkable. There are also great choices for public transportation.

It all starts with the Airport Express, a fast train from Hong Kong International Airport on Chek Lap Kok Island, across the Tsing Ma Bridge, and through a tunnel under the harbor to Central. Much of this infrastructure was brand new when we lived here in the late 90s. Starting in 1997, Standard Chartered bank sponsored races which coincided with the openings of these structures. We ran a 10K on the bridge in the late 90s. It was raining so hard that fountains of water shot up from our sneakers with every step we took. Nancy ran a 10K at the airport in 1998. This run was unique in that the whole platoon of racers was visible from start to finish going back and forth along the runways with zero elevation gain.  The 10K through the new tunnel was interesting. Thousands of black-haired, Cantonese-speaking runners chatted and shouted on the downhill entrance to the tunnel. Then it was dead-silent on the strenuous uphill. Finally those thousands of runners cheered in Cantonese when they reached the light at the end of the tunnel. Not speaking Cantonese, we didn’t know what to say.

The 2015 marathon/10K was held the last day of our visit to Hong Kong with over 70,000 runners; we could have lodged another run if we had planned ahead. (They have nice medals.) Jeff, the husband of our friend Catherina Fung, was running his 16th marathon/10K! Way to go!

The man on the far right was the marathon winner in 2015. (The guy in yellow on the left was a half-marathon runner who started several hours before the marathon group.)

When we lived here as ex-pats, we drove our personal car. That meant the driver sat on the right side and we drove on the left side of the road. It really wasn’t too hard to get used to, but with Hong Kong’s narrow streets and multi-level in-city highways going in all directions, it was sometimes confusing. It was also crowded. One of our then colleagues described Hong Kong as being “six cars short of total gridlock.” Now it might be four cars.

One of the worst problems is that every vehicle uses the same lanes.

We also sometimes used a driver. Then it was a luxury car, maybe a Mercedes. Now the luxury vehicle of choice seems to be an Alphard from Toyota or similar models from Honda and Hyundai. We haven’t seen anything like this in the US. The boxy rear is generally set up with a plush interior and privacy curtains. We didn’t get inside one. 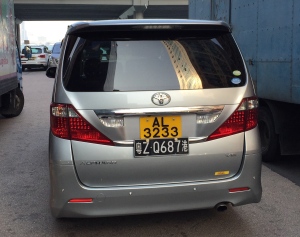 Has anyone seen an Alphard anywhere else?

Of course, some folks drive even more expensive cares. The McClaren dealer on Queens Road is new since we left (right across from our favorite non-Chinese restaurant, Relais d’Entrecote, also new to Hong Kong). Only 140 of these cars have been sold in Hong Kong, at a price of $6,000,000 HK ($750,000 US). Anyone want us to order one for you? 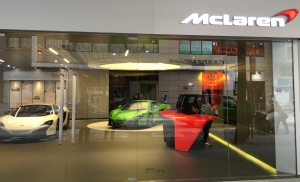 We weren’t allowed inside this car either.

We used the “travelator” a lot on this trip since we stayed in Midlevels. This is a one-way system that is part moving-walkway and part escalator. It extends from the commercial areas of Central up, up, up to the residential high-rises (and bars). It runs downhill until 10a.m. and then after a 20-minute changeover it runs uphill. This was great for us to use to get to our apartment at the end of a long day.

The only problem for some people was that the travelator runs in only one direction at time. Apparently there have been issues with this system. Read rule number 4 carefully. 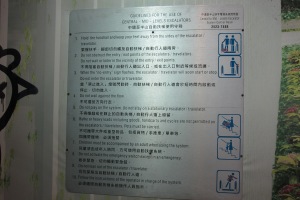 You must not wail against the flow. (The Chinese actually says “walk,” not “wail.” Makes you wonder what the characters on your Chinese tattoo really mean.)

For up/down travels, there is also the Peak Tram, a funicular train with just one route, up and down between Central and Victoria Peak. It has an incline of about 45 degrees. When we faced a crowd of a thousand or more at the Peak waiting for the 150-seat-capacity ride down, we walked the zig-zag Old Peak Road down instead. Even with all its traverses, it would probably still have been a blue (intermediate) ski run, pretty steep and very narrow. 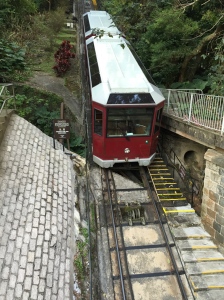 Not just for tourists, the Peak Tram has stops along the way for commuters.

The red taxis are ubiquitous, very handy and pretty affordable.

Before we moved here in 1995, a British colleague said about Hong Kong: “You probably won’t get shot and if all else fails, there’s a McDonald’s on every corner.” There are no guns in Hong Kong and Mickey D’s are everywhere.

Historically taxis used diesel fuel and contributed heavily to the air pollution situation in the city. Now nearly 100% have been converted to LPG, a much cleaner fuel. Unfortunately, air pollution in Hong Kong has gotten worse, primarily from increased manufacturing in Shenzhen, Dongguan, and other areas in southern China. Monitoring stations throughout the city track and report levels daily.

On one day of our visit, the air pollution was classified as “very high. Limit time outdoors.” We didn’t realize how bad it was and did about 10 miles of hiking and walking in and around the city…

Not the bright blue skies we remembered.

The MTR (subway) provides great service along the northern part of Hong Kong Island and up into Kowloon. It has expanded lines since we lived in HK and provides enclosures protecting people from being pushed off the platforms at each station. During rush hour it’s a sea of people, mostly black-haired.

Not many foreigners here.

One thing that hasn’t changed is the mass of humanity switching lines at rush hour.

Ideally, you know where you’re going, or you might end up getting pushed along with the crowd.

The Star Ferry travels between Hong Kong Island and Kowloon. The trip is very short now, since the harbor has been filled in, pushing the Central pier ever closer to the northern side of the harbor…and farther from Central. Business has fallen off dramatically now that it’s not a convenient commuter choice.

We always liked finding the plaque indicating which of a dozen or so ferries we were on.

We still love the double decker buses, especially the #6 that goes back and forth between Central and Stanley.  Sitting on the front of the upper deck is a treat as the bus goes around the twists and turns giving amazing views the South China Sea. Occasionally there’s a tight squeeze at the top when two buses meet on a turn. The bus does double duty with both transportation and landscaping. You have to blink occasionally when the bus hits foliage 30 feet over the street. 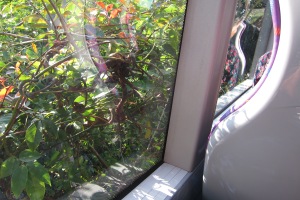 Looking out the upper deck window directly into foliage. No need for workers to trim the trees; the buses do it.

The second cheapest way to get around the island of Hong Kong is the tram, only $2.30 HK (about 30 cents US!). It travels east-west along the northern part of the island. Parts of this were once the shoreline along the harbor before land reclamation moved the shore out into the harbor…multiple times. Click on the video to take a short ride on the upper deck of a tram.

The fare for all these bits of transportation can be paid with a single card, the Octopus. This card can also be used at numerous restaurants around the city, very handy.

For the very cheapest transportation around the city, Hong Kong is very walkable…as long as you remember to look for cars driving on the “wrong” side of the road…

and you don’t mind stairs.

You have to CLIMB stairs both in AND out of the MTR.

Navigating these winding stairs when the tram is lurching isn’t easy. 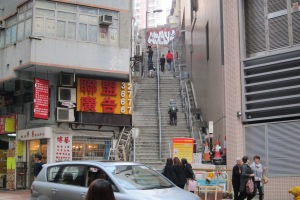 A long climb back to our Midlevels apartment when we weren’t near the travelator.

We did get a lot of good exercise! Eight days, about 80 miles. By now we should have lost half a dozen pounds, except we’re eating too well!